Seven was almost 10 points clear of Nine with the BBL Challenger giving the network an easy win.

Seven won all markets including Perth where 7Mate was the second ranked channel. Brisbane was Seven’s second best market for the night.

Q+A’s new night was a bust. While not making the top 20, the rating for an 8.30 pm timeslot was just below Sunrise and down on its results in the 9.35 pm Monday timeslot of previous years. Back Roads, by contrast did very well and for the second night in a row saw ABC with the highest rated entertainment show.

News numbers eased in Perth while Seven managed a win in Melbourne.

Big audience share for 7mate thanks to its coverage of BBL Challenger in Perth.

Barring last minute ratings disasters, Seven should have this week in the bag.

Despite the low figures, I think the ABC has to stick with Q+A for the rest of the year. For many years Thursday nights had been a ratings wasteland for the ABC, and I think the combo of Back Roads and Q+A will lift the channel’s share over time.

Both 9GO! and 9Gem fell below 2% share with no live tennis.

This is getting embarrassing for the commercial networks. Beaten by cheaper to produce fare like Back Roads and Hard Quiz when the commercials spend millions for sport and formats that fail to deliver bang for buck.

Q+A is the title of ABC’s News/Politics Panel Show. However, it’s spoken as “Q and A”. Nobody speaks it as “Q plus A”.

The geniuses at the ABC could not even get the title right. It should be Q & A. Haven’t these brilliant writers/journalists ever heard of the “ampersand”? It’s right there on their keyboards–above the number 7.

Channel 7 did well beating Nine thanks to the bbl between scorchers and heat. Despite the declining Holey Moley ratings, I think 7 will win this week.

In Perth, the late night news conference disrupted viewing. Seven didn’t return to normal programming on the main channel until 9:45pm. That saw the movie Gown Ups rank 4th in the city (mostly made up of the news conf) just ahead of BBL on 7Mate.

Q&A rates poor because it is aimed at one side of politics. If it was a little more “inclusive” then they would get more numbers. They’ve all moved to SKY since Q&A first came on the scene and performed well. Now their audience is split.

I’m surprised other states took the press conference from the Victorian Premier.

This was the WA media conference - Seven’s coverage ran for +1 hour. 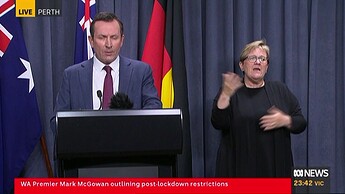 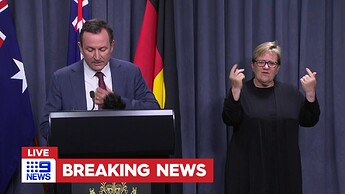 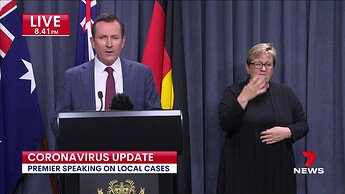 Maybe the program will eventually establish itself into a Thursday night hit. But with the show eventually going to be up against stiff competition in the form of Gogglebox and AFL/NRL, it’s not hard for me to imagine seeing “Axed: Q&A” as a headline on TV Tonight or TV Blackbox by the end of the year.

This is getting embarrassing for the commercial networks. Beaten by cheaper to produce fare like Back Roads and Hard Quiz when the commercials spend millions for sport and formats that fail to deliver bang for buck.

It’s almost as if viewers are wanting new and exciting programming formats that our commercial networks just aren’t offering!

It’s almost as if viewers are wanting new and exciting programming formats that our commercial networks just aren’t offering!

Probably just sick of the hype and the endless saturation promotion for formats that weren’t devised to prop up ratings multiple nights a week. I’m always curious to see how formats translate when produced in Australia but I seldom go back for more once I’ve had a taste. A one hour or half hour show on the ABC or SBS will hold my attention but I find myself losing interest with bloated formats full of product placement that are designed to fill time in the schedule rather than engage me as a viewer. There’s something to be said for a well produced, tightly edited piece of entertainment.

Hopefully The Cube sticks to an hour.

I doubt it will though.

Was Home And Away a triple bill on Thursday? Very low numbers again!

One episode only for Home and Away , on 7Two in Brisbane and Adelaide.

Yet I’ve always written it as Q&A, go figure.

Not to mention Holey Moley. Big Bash has come and gone, the Nine Network and content, in my opinion…quality wins out. Be interesting to see the BBLeague ratings on Monday. : )

Q+A is the title of ABC’s News/Politics Panel Show. However, it’s spoken as “Q and A”. Nobody speaks it as “Q plus A”.

I think it’s pretty well taken for granted, AmFmDigital, political correctness is for the birds, it’s 2021. : )

Be interesting to see the BBLeague ratings on Monday. : )

The figures are out now… see TV Tonight. For some reason we are banned from mentioning them on this forum though.