Probably too expensive but sounds like Braidwood FM could have a repeater somewhere, like the community radio station on the Northern beaches in Sydney.

We are looking at repeaters but the issue is getting a licence extension to Bungendore. The real issue is the Great Dividing Range; it not only robs Bungendore of rainfall but also signal from Braidwood FM.

On Thursday 19th May 2022, I’ll be doing my 30th anniversary show, from when I first broadcasted on Community Radio (Tuesday 19th May 1992 at SWR FM), and it will also be my last program. My health is deteriorating faster then I thought, and have to concentrate on other priorities. It’s not a sudden “I’m going to die in a year” situation, but my vision is notably getting worse, and they are a few life endeavours I would like to complete, before the big “IF” I ever going to go completely blind. The Fresh Mix will continue as per usual on one of the Starter FM internet sub channels, but my mind and enthusiasm are just not into producing curated shows anymore.

Just catching up on this thread. So sorry to read about your vision and ongoing condition. I hope you can complete those other things on your to-do list. In the meantime, again thank you for the Fresh Mix, I stream it most of the time while working from home.

I created an 80s TV channel to test some equipment, have a watch here: Twitch

The quality is great. Sabrina looks as good as she did in 1988

Just catching up on this thread. So sorry to read about your vision and ongoing condition. I hope you can complete those other things on your to-do list. In the meantime, again thank you for the Fresh Mix, I stream it most of the time while working from home.

Thanks for the sentiments, very much appreciated, doctors say it’s a worsening cataract, in one way they’ve said it’s gone as thick and matured as much as it can, so they feel my vision can’t get any worse. Nevertheless it’s a rather frightening thing to go through, and family and friends are still waiting for the sci-fi book that I was going to release about ten years ago. It’s half finished, and still needs a lot of copy editing, and many art illustrations have to be finished off. It’s something I’m looking forward to doing, and would like to get out of radio, as much as I’ve liked broadcasting a particular format, the attittudes, and enegy within the industry is not exactly inspireing.

That was one of the goals I wanted to achieve, or DAB+, but too much money wanted, bureaucracy, license hoarding, and greed from the powers above. So I’m out. Dead end path, it’s as far as I can push it. The price of a small house for a LPON is an example of how ridiculous things have become. Starter FM’s been great, I’ve enjoyed the involvement, but pushing the fresh mix toward a more broader audience means getting it on more visible platforms (DAB+ / HPON), ultimately that involves communicating to the corporate and social influencer cliques who are completely sheilded in their echo chambers, non respondent to any correspondence, emails, proposals, or ideas put forward. Time seems to be right for moving on, I’ve given it my best dash, time to turn the page.

Finishing this post off on a more positive note, tomorrow I’ll be counting down the top 25 singles from this week 40 years ago, Sunday 2nd May 1982. Chose this week in particular as this was the week father’s family came over from Holland and stayed for a few weeks, and my cousins and I saw the double feature of Star Wars and the Empire Strikes Back at the Hoytes Mega Theatre that used to be located on Pitt Street before being knocked down sometime in the early 90s. Also was the time when I came home from school in sixth grade, and watched WROK rock 5:00 weekday afternoons, simulcast on 2SM and Channel 10 in Sydney, and I think 3XY in Melbourne. From memory it was hosted either by Frank Fersey, Paul Homes, or Ray Arthur, they were bloody awesome days to live.

The price of a small house for a LPON is an example of how ridiculous things have become.

At least it is more affordable in Bungendore (I think we are classed as regional, so <$1000 for an LPON). I would be open to getting involved should Daniel or yourself be interested; will have to OK it with Braidwood FM so that there’s no conflict of interest. I still want to be involved with 2BRW. Bungendore is quite affluent and a service like this would be appreciated I think.

Starter FM is at the Hawkesbury show till 10pm tonight if anyone is in the area and want to say hi. 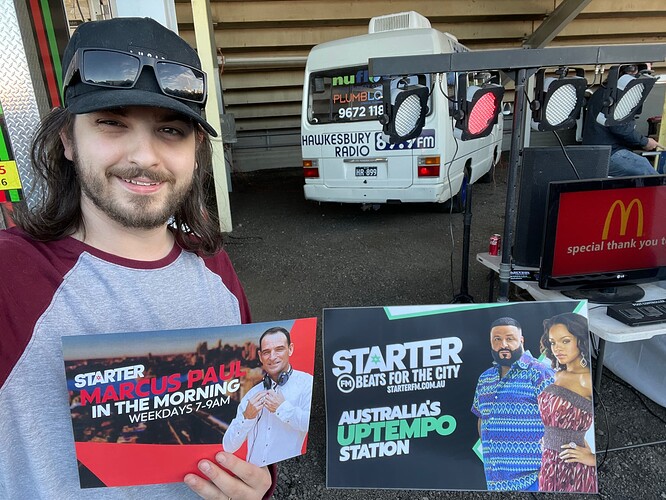 I am not at the show today but I am enjoying the Twitch 80s channel. I think it seems I am only viewer when I log on. You play quite a few 80s hits which I don’t think were released here as singles in Australia. Its great to see 80s video clips with such good video quality.

Wow , I really hope your health gets better so you are able to program more shows.

Just putting this here, not to hijack the radio stations music logues page.

I’m okay, it’s more the asperger thing, rather then the eye sight at present, there’s beena few snafu’s of late, nothing to put the world on fire, but rather more little annoyances that can turn into more pronounced frustrations.

The people who run starter have been rather gracious in letting me partake in such a venture, however I don’t want to jeopardise such an opportunity by ruining it with any misunderstandings or making a bad call in the heat of a bad moment.

I’m needing some time to step away, the original idea was for an off-sider to share alternative weeks with me, but due to his health, he has not been able to committ himself either, leaving me to do a show every week. If I was still 21, yeah, I would love to do it, but I’m way past 50 and no longer have the energy.

I can’t blame that on the owners, just have to keep in check my own motivations why I wanting to do certain things in the first place, and to just stay self aware. One of the biggest problems (generally speaking) with those on the spectrum is there is some disconnect in the neurons, thus they are not always in touch with how they feel.

A neurotypical’s feelings are progressive, thus they can engage in whatever they need to do, as they move from one mood to another, in expressing whatever it is that’s upsetting them, before it becomes a fully blown crisis, pretty much like a rainboe for blue, green, yellow, orange, to red.

However for some reason, with some auties, one can feel calm and blue at one moment, wile feeling absolute red rage the next, which can be over such simple things, because of some compromise in the ability of communicating the finer naunces of how one feels, this is well documented across the internet.

So in short, I’m feeling my mood state moving from blue to green, and am inticipating a shift to yellow if I don’t take any steps to make changes. This is rather commonsense to me now, but something I’ve had to learn through life experience, something that many learn at a much earlier stage in life through intuition. I’d emphasise that those on the spectrum would experience this in different ways, and no two people are the same, but generally speaking this is a common thread between those with High Functioning Asperger’s. 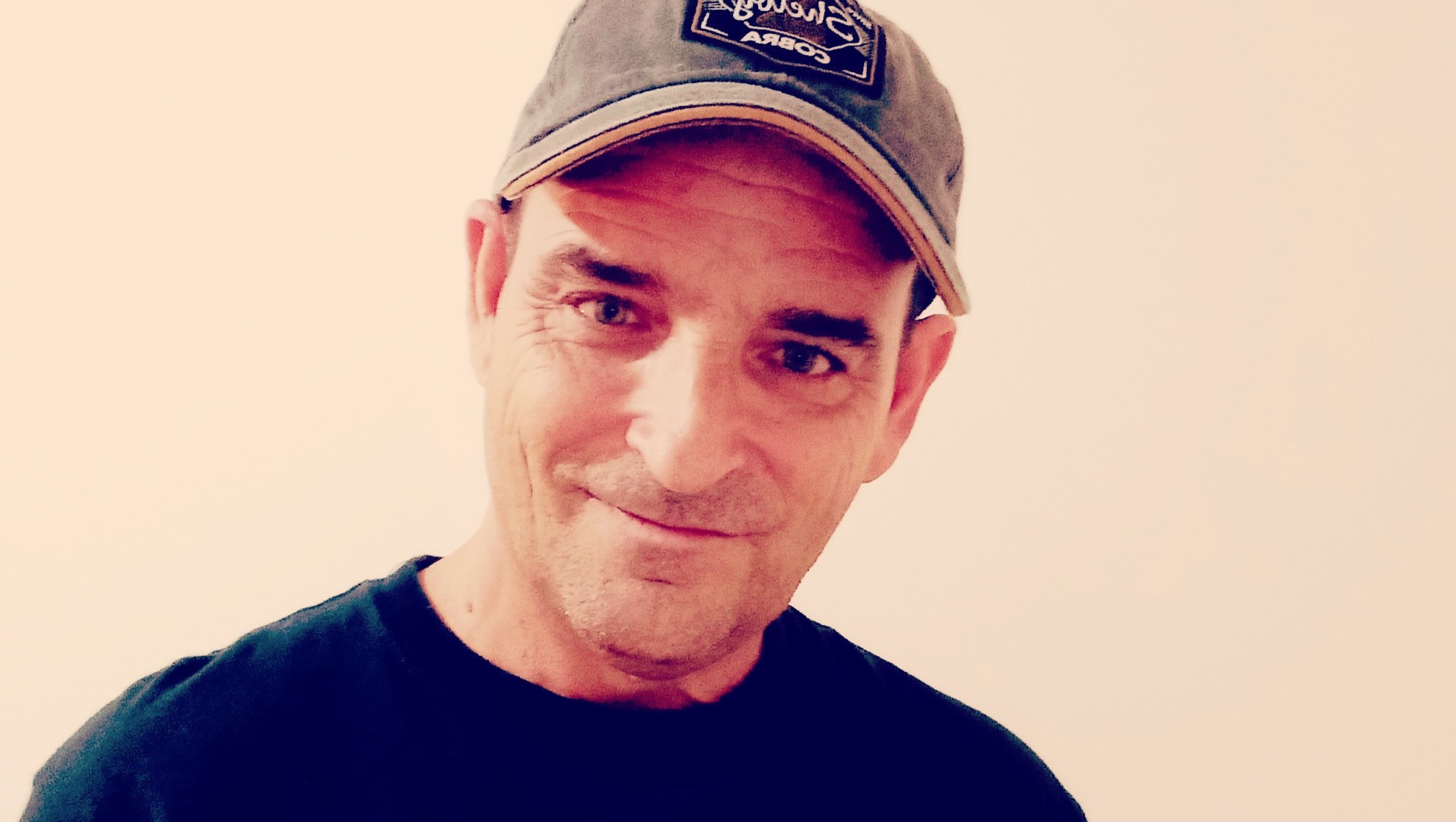 A question to the brains trust here. I’m now into the fourth month of the new show which airs on StarterFM, iHeart Radio Tune In and of course on my own podcast.
It seems to be humming along at it’s own pace and my podcast numbers are pretty good, at around 60,000 downloads - while my Social Media (Facebook) continues to have massive engagement with around 500K reach every 28 days.
Would this kind of show - news/talk/information be worthwhile perhaps offering to other community stations as well? It would come in segments as it does for StarterFM - and depending on what the station chose they could run it all together or have music and news (as StarterFM does) … and if so - would it be OK to charge a small fee (perhaps around $200 per month) - for around 10 segments or more each day? I’m considering offering it out as I don’t earn anything at the moment. It’s a serious question and I’d really appreciate your thoughts - Thanks so much.
Marcus Paul

If community stations would be willing to pick up Marcus Paul in the morning, then I say power to them, and then on the other hand some committees of community radio stations in Australia can be a bit prickly

, … I think the adoption of DRM technology across Australia in FM and AM markets which is just a simple upgrade of existing infrastructure… that could facilitate bringing a diverse media landscape that is desperately needed in the 21st century and the big main thing… the internet

I’m sure some would Marcus but no one will pay for it sadly. You could ‘buy’ 1-2 hour slots per week and on sell to a ‘station sponsor’ but a lot of community stations do get nervous with politically driven shows. Especially left leaning media. That’s a not a stab at you Marcus. Just what I’ve observed over the years.

Try and get a gig on regional ABC?

@Marcus_Paul, I would suggest not charging a fee to broadcast, but instead, use your footprint/broadcast reach to attract bigger sponsors.

E.g. broadcast across the East Coast thanks to [program sponsor].

By offering the program free of charge will encourage more community stations to come on-board.

That way, you could attract larger sponsorship dollars and get the money direct to yourself (so long as you mention “Program Sponsor” or similar to meet CBAA guidelines).