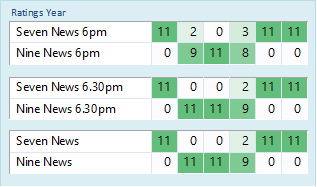 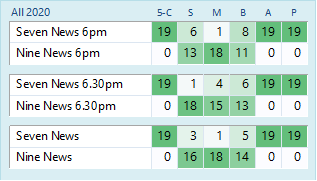 In the 5 cities Seven and Nine were down 29,000 and 21,000 respectively. Seven Brisbane won its second week of the survey with 3,000 more viewers than the previous week while Nine averaged 6,000 less. Sydney numbers dropped the most with Seven falling behind Nine in both half hours. 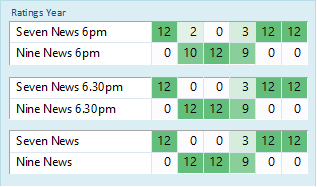 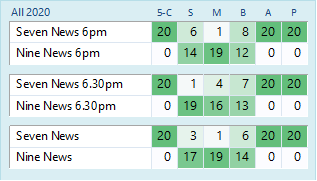 Seven lost audience in all markets except Adelaide, in total it was down less than 10,000 from the previous week. Nine improved almost 10,000.

Brisbane remained the closest-fought market with around 600 separating the two bulletins - Nine won at 6pm and Sven at 6.30pm.

Wow look at those Sydney figures. Really paints a picture. Nine have won only around half of the 6pm half hour but won almost all of the 630 half. Must be the Amber effect. Sydney love her.

Must be the Amber effect.

Wonder what @SydneyCityTV has to say about this! 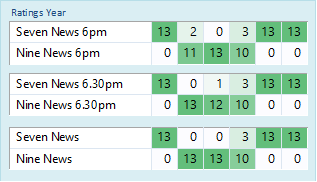 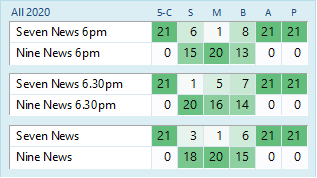 Nine News across the 5 cities was down just 2,000 while Seven News suffered a 35,000 fall from week 20. The biggest changes were Seven News Sydney down 17,000, Seven Brisbane down 18,000 and Nine Melbourne down 15,000 across the hour; with Seven in Melbourne winning at 6.30pm. It also saw Nine Sydney and Brisbane pull well ahead of Seven for the week. All bulletins except Seven Brisbane continued to post numbers well above the same week in 2019. However, elsewhere, ABC News posted its lowest audience since week 11.

7 Sydney, Melbourne and Bris just trailing Behind 9. 9News Adelaide not far behind 7NEWS. Only real gap is in Perth. Though at 6:30 seems that Nine News Perth is the only one to actually increase in figures? Coinciding with small drop in 7NEWS Perth, are viewers possibly switching at 6:30? Also what’s with the drop in Nine News Melbourne at 6:30?

Also what’s with the drop in Nine News Melbourne at 6:30?

Most likely it’s due to the impending reboot of the AFL season with people switching to Seven for sports coverage. As the AFL broadcaster Seven News should own Melbourne. Strangely it doesn’t. Nothing else has changed in the second half of their news.

As the AFL broadcaster Seven News should own Melbourne. Strangely it doesn’t.

The only time this century that Seven News Melbourne has really been that dominant was between 2007-11, when they shared the AFL rights with Ten.

But I would like to think that Nine News’ dominance in Melbourne is more than just sports coverage and Hitch’s appeal.

But I would like to think that Nine News’ dominance in Melbourne is more than just sports coverage and Hitch’s appeal.

That’s one of the main parts to it

As @MasterMind5991 says, it’s more than just sports. Peter Hitchener is probably one of the most renowned presenters in Melbourne. Take that with some of the best reporters and good content and you’ve got a winner in Melbourne. While the team at Seven Melbourne is also widely known (in probably all sectors - news, sport and weather), the content is not enough to rival Nine in that field.

Going by the observations made on this forum, the quality of content on Seven News Melbourne seems to be a bit on the dodgy side.

As far as presenters/reporters are concerned, there are a few big names at HSV but I think Nine has the better and more well known talent overall. I’d probably be more concerned about a post-Mitchell era Seven than a post-Hitchener era Nine.

I’d probably be more concerned about a post-Mitchell era Seven than a post-Hitchener era Nine.

Mitch will turn 60 next month and unless HSV management decide to move him on, I could see him presenting the bulletin for up to another decade before handing over to someone else.

On the flipside, Hitch is 74 and still going strong at Nine News (in fact, their weeknight line-up has remained unchanged since 2004). When he does retire, it will be a sad day for Melbourne news in general, but they do have a very capable successor in Alicia Loxley who can take the bulletin forward. No sexism intended, but would GTV be willing to gamble and have a female presenter on weeknights as the new face of their news bulletin?

We saw what happened in Sydney after Ian Ross retired from the Seven News chair, just as that bulletin was peaking in the ratings (mind you, it was also Peter Overton’s first year in the Nine News chair). Roscoe handed over to Chris Bath and Seven News started losing nights as early as December 2009 as those long-time Seven viewers switched over to sample Peter Overton on Nine News - something which continued into 2010.

but would GTV be willing to gamble and have a female presenter on weeknights as the new face of their news bulletin?

As has been mentioned before, Alicia’s ratings on the weekend are huge and arguably much stronger than Hitch’s.
It’s a gamble that I reckon will totally pay off for Nine News Melbourne.

Melbourne is probably the most progressive of the five metropolitan markets. So if Nine were to have Alicia Loxley as the successor to Hitch, I think audiences down there would be fine with that.

Looking at the individual Saturday which was the 23rd on TVTonight, looks like nothing reached 1M, not even news, making ratings significantly lower in all markets (except Nine News Melbourne). A difference of 43,000 in Melbourne news market with Nine News obviously taking the lead.
Seven News Melbourne is faring alright on weekdays for now, but seriously needs revision for weekend line up.
Also, most of you seem to be forgetting something - the reporters are also not necessarily the problem here. The content should be Seven’s main focus point. Switching to Nine, it was evident Nine covers more points of stories compared to Seven.

Apart from 6pm, I also looked at the 5pm battle between Seven and Nine. Seven got beaten by Nine in almost every market which is rare. The only market making an exception is Perth.

This topic is about the weekday 6pm battle. Apart from occasionally branching out it is better to keep discussion of other news bulletins in the daily topics thanks.

Ok, thanks for reminding me

I wasn’t sure where to put the 5pm battle in. 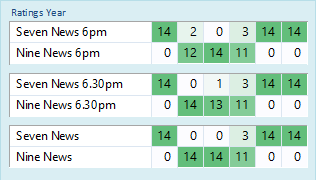 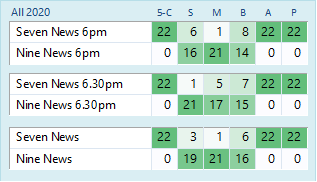 Quite a revealing colour scheme this week with a predominance of red. Seven News 5-city number was down 12,000 and Nine lost 17,000. Most falls were minor. Seven Melbourne had the biggest drop averaging 15,000 less. Nine pulled further ahead in Brisbane, while Seven Perth is closing in on Brisbane as the network’s third biggest bulletin.

9’s dominance in Brisbane is just tragic. I have no idea what Brisbanites are thinking!