Knowing how fickle viewers are, that very well could be the case. How else can you explain the trend of viewers returning to Nine News Sydney during the 6.30pm half (after Seven’s had been trending up in recent months) which seems to have coincided with David Brown’s absence?

If David’s 3 minute weather update has this much influence on the figures they would be mad not to promote him to newsreader of the bulletin to give him more airtime.

Quite a big drop for Seven News Melbourne during the week.

It was Seven Melbourne’s lowest average since Week 13 in March with Thursday’s result their lowest rated bulletin this year. 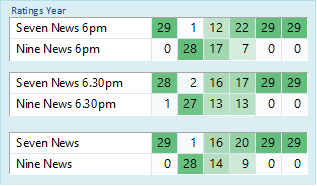 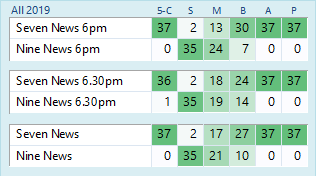 Most bulletins recovered from last week’s lows. Nine won in Brisbane and there was a tie in Melbourne.

More sensationalised promos = more chances of winning. Why stuck on Aldi when Nine Brisbane can find another way to hook up audiences and possibly closing the gap on Seven in the second half and overall? Hahahahahah. 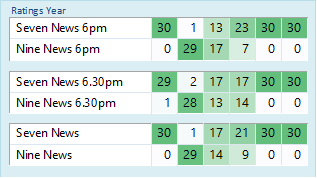 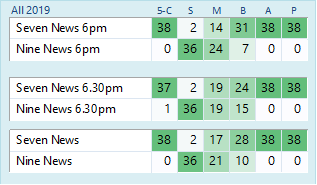 Seven News Brisbane reaches the 21 weeks won milestone in a week where Andrew Lofthouse presented solo on Nine. Nine News was down in the majority of markets including Adelaide where it recorded its lowest rating this year.

Elsewhere, The Project (Mon-Fri) recorded its best numbers of the year.

Seven took Melbourne back this week. If nine loose Melbourne this year, it will be a huge loss for the network.

While I’ve also got problems with the current leadership of Seven News (particularly from a Sydney market perspective), maybe it’s time that Nine seriously considered bringing in new news directors for Melbourne, Sydney and nationally who can bring some fresh ideas to the table.

Congratulations to the team at Seven News Brisbane for a second straight years of ratings victories (at least on weeks won).

This comes two weeks earlier than last year, when they won their 21st week in the week of October 1.

Can’t see any justification for Nine using this endboard. Seven number one based on the criterion that Nine uses for wins in other markets plus Seven won all the TV awards at the recent Clarions. 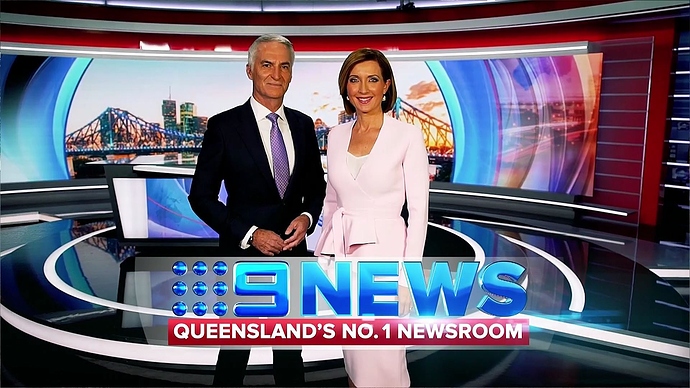 But again, what makes it the No 1 Newsroom?

Nine News Queensland could be basing their “#1 Newsroom” claim on the fact they were the first television station (and news service, probably) in the market?

Yes, but they could make the same argument to describe the news as number one because it was the first to air, yet they don’t; besides surely the ABC, Courier Mail and many radio stations had a Queensland newsroom before Nine.

End tag is describing the newsroom not the bulletin start time

Maybe they have the best carpet or office chairs? That’s what makes their newsroom number 1?

That would make them “first” not number 1