With three weeks to go in the ‘official’ ratings period, I thought we could check in on each bulletin’s average overnight audience so far this year and track a comparison to 2020’s results up to the end of week 45.

All markets show the same bulletin that is leading in ‘weeks won’ is also leading in the average audience. It looks like Melbourne, where Nine is winning at 6pm and Seven at 6:30pm and is the only market close enough for any turn around, though very unlikely.

Generally news numbers are down except in Sydney and for Nine Adelaide. it will be interesting to see if Seven can stay above one million after 48 weeks.

Wow, Nine the real winner in Adelaide with the departure of proper local news from 10. 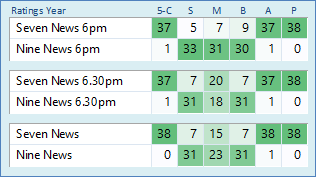 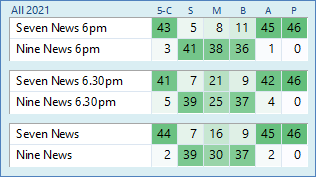 5 Cities: Significant loss of audience for most bulletins with Seven shedding an average of 26,000 and Nine 37,000 viewers from the previous week. The results were the lowest since March with both bulletins averaging below 800,000.

Sydney: Seven News posted a small increase from the previous week to buck the downward trend and was up 6% on week 46 of 2020 while Nine was down 2% but still with a comfortable win.

Melbourne: Both bulletins were down by +10,000 but with a win on every night, Nine won the week. Seven was down on the same week last year by 10%.

Brisbane: Comparatively poor week for Nine with Seven taking out a narrow 6pm win with Nine just winning across the hour. Seven had some bad nights though, especially Monday when it lost by 40k but picked up wins on Thursday and Friday. The absence on Friday of Andrew and Melissa notable in the numbers.

Perth: Seven was down 6k and Nine by 3k with another easy win for Seven despite being down 18% from the same week of 2020; Nine was down 7%. 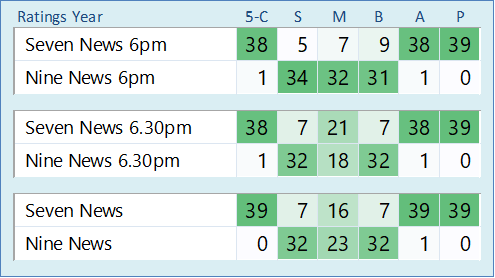 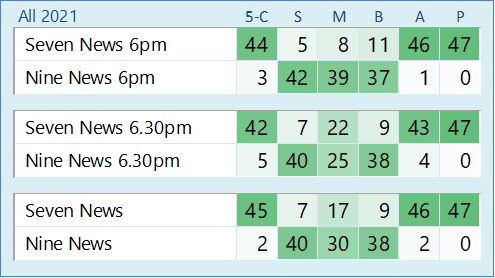 5 Cities: Another big drop in audiences for both bulletins. Seven was down 17,000 and Nine 34,000. Compared to the previous year audiences are down about 6%.

Sydney: Both bulletins lost an average of 10,000 viewers per bulletin last week. Nine was down 7% from 2020 while Seven was up 2%. Another easy win for Nine though.

Melbourne: Seven wins the week narrowly, a big improvement on the previous week. Seven was up 9k while Nine lost 19k week-on-week.

Brisbane: Another close result in Brisbane as both bulletins recorded their lowest weekly audience of the year with Friday bulletins the lowest rated of the year. Compared to 2020 Nine was steady but Seven was down 16%.

Adelaide: After a tie on Monday, Seven swept the rest of the week. Both bulletins notable for being down around 15% from the same week of 2020.

Perth: Seven’s dominance in Perth continues despite the bulletin being down 15% from week 47 of 2020.

Melbourne: Seven wins the week narrowly, a big improvement on the previous week. Seven was up 9k while Nine lost 19k week-on-week.

And with that, it’s another half-and-half between Nine (6:00) and Seven (6:30) for the 2021 ratings season, except that Nine News wins Melbourne across the hour. 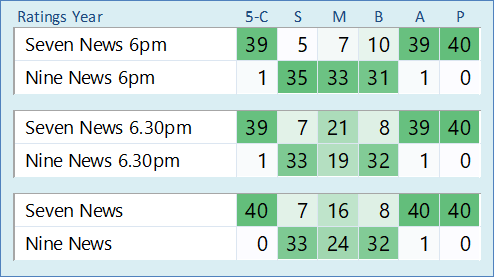 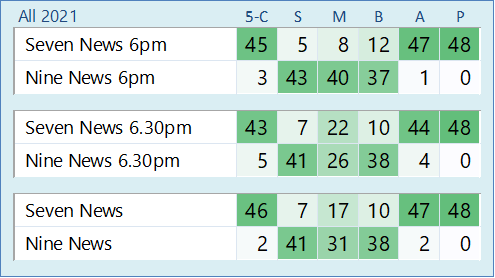 5 Cities: News audiences edged up for the last week of the ratings period, especially in Sydney and Brisbane, possibly related to the big rainfall event and flooding. Seven was up 35,000 and Nine 13,000 from the previous week.

Before the start of the 40-week ratings period there were signs of a closer than usual contest with Nine taking out a couple of weeks, but in the end it wasn’t close with Seven winning 40 weeks across the full hour with Nine managing to win 1 week at 6pm and 1 week at 6.30pm. It is Seven’s fourth consecutive 40-week win.

Sydney: Seven grabbed 7 weekly wins this year, its best result since 2016, helped by results around the time of the Olympics.

Melbourne: Seven did significantly better in Melbourne as well than recent years, to the extent of winning 21 of the 40 weeks in the 6.30 pm segment. Nine, however was well ahead at 6pm to win across the hour.

Brisbane: A rare win for Seven in Brisbane last week. Unfortunately, it was a disappointing result overall in 2021. In a big turn around in viewing habits, Seven had won 2019 29 - 11 weeks while Nine won last year 26-14 to increase its lead this year with 32 - 8 wins.

Adelaide: Nine’s audience continues to grow in Adelaide and in week 19 the bulletin won at 6pm for the first time in 13 years while it was a tie across the full hour.

Perth: Seven continues it winning streak in Perth where Nine’s modified afternoon line-up hasn’t made any inroads into Seven’s dominance.

Seven was hoping that the new version of The Chase with Larry Emdur would help the ratings of the 6pm segment of the main news in Melbourne, but it failed miserably. Back to the drawing board.

Sydney: Seven grabbed 7 weekly wins this year, its best result since 2016, helped by results around the time of the Olympics.

It is also worth noting that they won the first two weeks of the ratings season, during which Nine televised the Australian Open. Seven News won those same two weeks in Brisbane too, if I remember correctly.

The average audience results closely mirror the weeks won results - including Seven winning at 6:30pm in Melbourne, the closest market in this year’s results.

The five-city results were down 3-4% on last year’s numbers. Nine Adelaide showed the biggest improvement while the Perth bulletins dropped the most. The Sydney market was the only one where both bulletins improved their audience.

Becasue the COVID pandemic has tended to increase the audience’s appetite for news, I thought it would be good to also compare the results to 2019.

With Sydney and Melbourne subject to lockdowns this year, the impact on news services can be seen. In Brisbane the shift from Seven to Nine is reflected in the results while Nine’s resurgence in Adelaide produced a remarkable result. Nine’s Perth bulletin, however, had the highest audience drop. 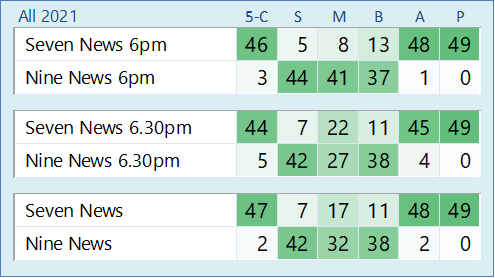 5 Cities: Big win for Seven across the 5-cities including in Brisbane for the second consecutive week. That was despite dropping 30,000 from the previous week while Nine was down just 6,000. The biggest drops were for Sydney with Seven down 17k and Nine 7k and Perth where Seven was down 12k. Both Melbourne bulletins were up around 4k. 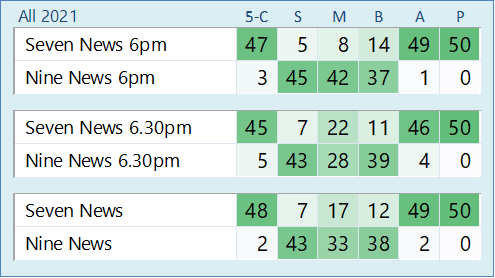 5 Cities: Seven and Nine bulletins were down around 28,000 viewers last week with both recording their lowest audiences of the year. Seven didn’t get any benefit form the Ashes lead in in Sydney and Melbourne while Seven Brisbane had another narrow win across the hour. 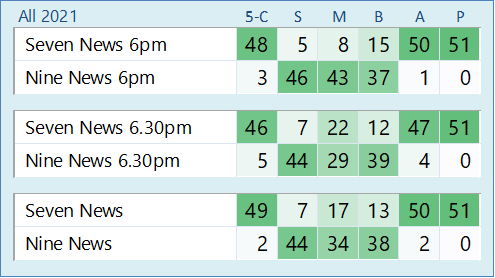 Numbers down for all markets except Perth impacted by the Ashes coverage on 7Mate at 6pm drawing audiences away from the news.

Seven did surprisingly well this week despite their main anchors all on leave and Nine’s big promotional push re. the reopening.

In Brisbane Nine won Monday and Tuesday while Seven won the other three including Thursday and Friday by large margins with the Ashes as lead in (and no Gold Coast News). Andrew was also missing from Nine’s coverage but you could speculate that the result might also be a reflection on Seven’s main anchors. 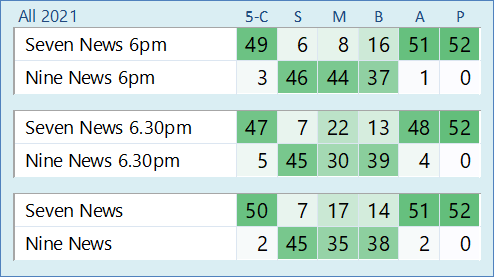 Seven managed to pick up some extra viewers in Sydney and Perth, with the bulletin up 16k in the 5-city market while Nine dropped by 37,000.

The end of the year saw another easy win for Seven with 50 weeks won. The two weeks that Nine won were in January in what looked like it might have signalled a bigger shift in viewing patterns.

The biggest change was a shift to Seven in Melbourne. Smaller movements saw Seven do better in Sydney and Nine increase its lead Brisbane. In Adelaide Nine was notable for its first weekly win in a ratings period since 2006. 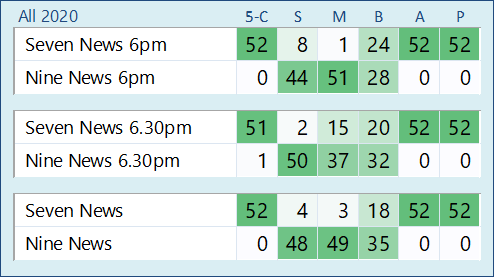 More analysis of the audience numbers on a day that isn’t Christmas.

Compared to the 40-week ratings period numbers posted above the calendar year averages were about 6% lower for both bulletins in the 5-city markets.

Compared to the 2020 Calendar Year there were some big fluctuations, tempered by the Sydney market that had a bigger news year than most. Nine Adelaide a stand out performer across the year. 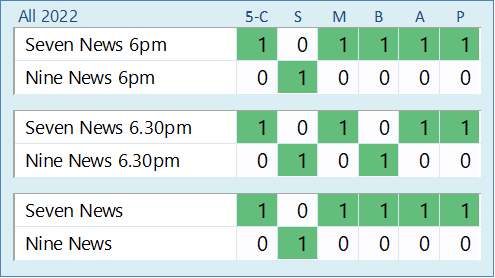 Here we go again with another tallying of the weeks won across the year. Most bulletins posted moderate gains from the last week of 2021 (that featured low-rating Christmas Day). Seven News was up 54,000 and Nine was up 58,000 on average.

Brisbane delivered the closest result with a split between 6pm won by Seven and 6.30 by Nine. Despite a couple of daily wins in Adelaide for Nine, Seven took out the week.

Brisbane delivered the closest result with a split between 6pm won by Seven and 6.30 by Nine.

This appears to be the general trend.
7 is often weaker in Brisbane at 6.30, but stronger in Melbourne for that half hour.
Not sure what implications that has for Home and Away as a lead in.

Seven News won the week in Melbourne despite having cricket as genuine lead-ins only on Sunday and Monday, when the Boxing Day Ashes test finished early.

Nine Adelaide a stand out performer across the year.

I think Nine will win more nights in Adelaide in 2022 and eventually claim a week.