Or they could go back to solo readers on weekends.

This is what Seven News Sydney needs to do with their Friday/Saturday night bulletins.

Don’t think I’ll ever understand why after a few years of instability with Nine’s Friday/Saturday night Sydney 6pm bulletins (GG replaced by Deb, then GG coming back), Seven thought it was a good idea to make major changes of their own by bringing in the dual presentation format with Usher & Cox on Boxing Day last year.

Don’t think I’ll ever understand why after a few years of instability with Nine’s Friday/Saturday night Sydney 6pm bulletins (GG replaced by Deb, then GG coming back), Seven thought it was a good idea to make major changes of their own by bringing in the dual presentation format with Usher & Cox on Boxing Day last year.

I’m convinced that Seven only made this move to give Angela Cox something proper to do at the network.

The sooner the double header ends, the better. I don’t really care whether they keep Michael or Angela for weekends, just pick one of them.

I think 7 Adelaide needs to look for a co anchor to join Jane on weeknights.

Perhaps really get a new set

Or revert back to the original desk

Re the tie in Adelaide: Firstly it is based on preliminary numbers, however these rarely change for weekday bulletins. But, also, the published numbers that we see are rounded to the nearest 1,000 - which is an OZTAM “rule”.

However, from previous experience we have seen networks argue over fewer than 1,000 viewers to claim victories (example Sunrise vs Today). So I checked the “raw” data and if that is used, Seven was the winner by a very small margin. But for our purposes it’s a tie!

According to TV Tonight, it’s a win to Nine News Adelaide.

According to TV Tonight, it’s a win to Nine News Adelaide.

The TV Tonight article says exactly the same thing as our data - that Nine won at 6pm.

It also confirms the tie across the full hour.

If both half hour blocks were added together then both average 196,000 viewers

I think readers of this forum can understand that Nine won at 6pm then was overtaken at 6.30 then the average across the hour was a tie.

Also worth noting that Nine has won 6.30pm half hour 3 times this year in Adelaide. Week 5 was a tie across the hour after rounding. 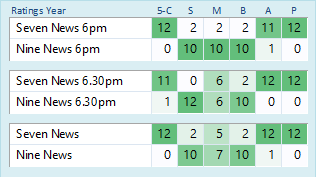 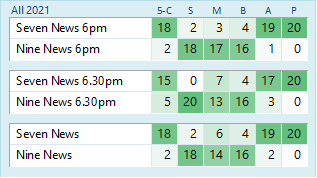 5 cities: Nine closed the gap, up 12,000 from the previous week, with that largely due to an improved performance in Brisbane. Seven was also up, but only by an average of 500. Compared to the COVID impacted results of last year Seven was down 19% and Nine down 14% from week 20 of 2020.

Sydney: Another clean sweep for Nine to an easy win across the week. Seven’s Friday number continues to struggle with last night’s the lowest number in 9 weeks and a whopping 64,000 behind Nine.

Melbourne: Three wins for Nine and wins for Seven on Wednesday and Friday saw another close result for Melbourne. Nine was ahead at 6pm and Seven won the 6.30 pm half hour to bring the contest to 6 wins each in the second half hour.

Brisbane: Five out of five wins for Nine in SEQ. Seven came close on a couple of nights but Nine increased it lead overall. Compared to week 20 of 2020 that Seven won, Seven is down 20% with Nine down 12%.

Adelaide: After last week’s close result, Nine lost an average of 4,000 viewers while Seven was up slightly winning both half hours. Nine did win two nights and continues to be the only bulletin up on the equivalent week from last year.

Perth: Way out west and Seven, even losing 12,000 viewers week-on-week maintained its big lead over Nine that was steady with week 19. The Nine bulletin is down the most of any in comparison to 2020, slipping 27%.

Sydney: Another clean sweep for Nine to an easy win across the week. Seven’s Friday number continues to struggle with last night’s the lowest number in 9 weeks and a whopping 64,000 behind Nine.

Almost as if the Usher/Cox duo was a really bad idea.

Surely Seven are going to do have to take some action on these abysmal Friday numbers in Sydney?

They actually are relatively competitive from Monday to Thursday, but then on Fridays all the momentum is lost.

Hi TV.Cynic, I think this should read Week 20

Thanks for collating this info each week for us 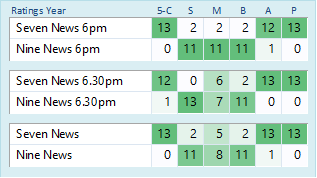 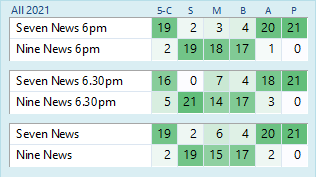 5 cities: This week’s numbers notable for most bulletins losing audience week-on-week. Seven was down an average of 13,000 while Nine lost 34,000 with drops in all markets.

Melbourne: Seven narrowly won two nights in Melbourne by 1,000 while Nine won two nights by just 2,000. Thursday was the decider with Nine posting a 28k win to deliver the week.

Brisbane: Seven managed a tie on Tuesday but was easily beaten on the other nights recording its lowest audiences since early March.

Adelaide: Slight up tick for Seven and down tick for Nine with the daily score 3 to Seven and 2 to Nine. Friday’s 28k win for Seven secured the week.

Perth: With Seven winning two nights by +100,000, it was another easy win in Perth. Nine’s Friday bulletin was its lowest rated for 2021.

It will be interesting to see if Seven bring in Mark Ferguson to read the Sydney bulletin tonight in an attempt to boost numbers.

Nine’s technical problems on Monday seem to have had a bad effect on the ratings for them, according to my calculations, here’s the Sydney bulletin averages from Monday to Thursday this week.

Looks like it will go down to the wire. 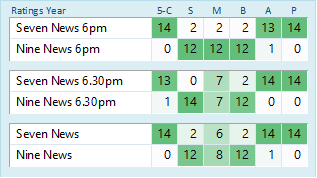 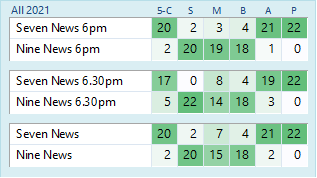 5 cities: Mostly green this week as particularly Melbourne posted some big increases. Seven Perth was down 6k while the other two red marks saw falls less than 1,000.

Sydney: After a good start to the week thanks to Nine’s Monday technical problems, Seven couldn’t’ follow through and lost Wednesday to Friday and was only up 2,000 on the previous week while Nine was down 800.

Melbourne: The Victorian lockdown saw both bulletins record their highest ratings of the year across the hour. Nine won the 6pm portion with Seven winning 6.30 and the full hour. Seven was up an average 55,000 each night and Nine was up 40,000 on average.

Brisbane: Seven had a narrow win on Monday and a big win on Friday at 6pm but was well behind Nine Tuesday to Thursday. Seven’s audience was 18k higher than in week 21 and Nine’s was 9k higher. It was Seven’s highest audience in survey this year.

Adelaide: It was a clean sweep with Seven winning every night in Adelaide and improving its lead over Nine by 8,000 from the previous week,

Perth: Friday night AFL as competition dragged down Seven’s numbers but it was otherwise another easy win.

Brisbane: Seven had …a big win on Friday at 6pm

They seem to be doing better better on Fridays than any other day the last few weeks… odd. 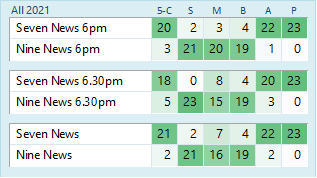 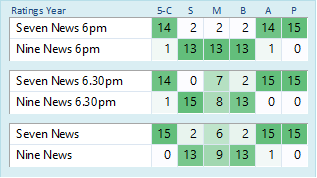 Sydney: Comprehensive win to Nine - all nights, both at 6pm and 6.30pm and up 26k from the previous week with Seven down 5k.

Melbourne: Nine won every night at 6pm and four at 6.30pm in Melbourne as well recording its highest audience of the year by a long way. Nine’s audience grew by 38,000 while Seven’s was down 4,000. Both bulletins rated higher than week 23 of 2020.

Brisbane: Nine won at 6pm on all days and 6.30 on four with Seven winning on Monday night in the second half hour. Both bulletins were down slightly from week 22.

Adelaide: The status quo in Adelaide; while Nine continues to outrate its 2020 position, Seven won all days last week.

Perth: Seven edged slightly further ahead of Nine in Perth last week. The Nine bulletin is currently performing the worst compared to last years of any bulletin.

Excellent win by Nine News in Melbourne, as a big week in news (lockdown) continued, this follows a good week last week for Seven - even though both networks had good raw ratings.

But for HSV-7 the station, the AFL etc should easily claw-back the lost shares at 6pm. 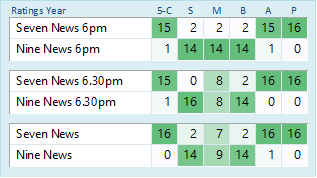 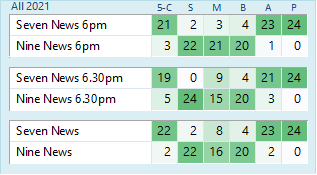 5 cities: Both bulletins were up from last week, perhaps surprisingly mainly thanks to Sydney given the news week in Melbourne. Seven got the biggest lift, up 28,000 with Nine up an average of 3,000.

Sydney: Another clean sweep for Nine with big winning margins on most night. Nine’s bulletin 4% rated higher than it did in week 23 of 2020, up 11k from last week.

Melbourne: Seven notched up another Melbourne win, thanks to performing better at 6.30 pm than Nine again and improving significantly at 6pm - Nine has won 14 weeks at 6pm but only 8 at 6.30. Both bulletins did better than the same week last year.

Brisbane: Nine won all nights this week and was up 8,000 week-on-week. Seven dropped 11k. Worth noting that Seven has the most popular bulletin on Sunday and Saturday in the market.

Adelaide: Seven is starting to pull away from Nine, making gains in the previous five weeks, this week up 4,000 while Nine slipped 4,000.

Perth: The usual result in Perth with Seven doing slightly better than it usual dominance.