Mark Ferguson is back presenting in Sydney tonight.

Sonia Marinelli is presenting weather in Melbourne this week.

Did he also present the weather in Brisbane?

Seven must be quite short-staffed with presenters at the moment. Sally Bowrey has been very busy in the last week doing Sunrise, The Morning Show, Weekend Sunrise, Morning News, and 6pm news on the weekend, and Amber Laidler is on maternity leave so they probably had no other choice but to use someone from interstate.

I have noticed this. One of the days last week (don’t remember which) it seemed that Sally read the news on Sunrise, hosted The Morning Show and then read the Morning News

Couldn’t half tell Tony wasn’t in the Sydney studio and it was pre-recorded. Wonder if Nine will attempt to get mileage out of this.

How would they do that?

Couldn’t half tell Tony wasn’t in the Sydney studio and it was pre-recorded.

Tony is a meteorologist presenting a detailed Sydney and NSW forecast. I don’t see the issue. A regular punter can’t tell

Given there’s no on screen interaction between the newsreader and weatherman and the onscreen presentation is different because Tony utilises a full green screen instead of the “box”, I think some will notice a difference. It shouldn’t be an issue if it doesn’t become a regular thing otherwise Nine will start claiming they’re the only commercial nightly news service presented fully live and local in Sydney.

Tony is a meteorologist presenting a detailed Sydney and NSW forecast.

Ray Wilkie was a Brisbane based meteorologist presenting a detailed Sydney and NSW forecast from Brisbane for TEN-10 back in the day. They turfed him fairly quickly when it became widely discussed in the Sydney press Ten’s weather report was coming out of Brisbane and wasn’t live.

I think your very much jumping the gun here. It’s literally been one night. No one’s talking about this being permanent at all.

Yes, I read that.

Yet still accused me of “jumping the gun”.

Yes I did. I wouldn’t even be thinking about the possibility of it being a regular thing. It’s been one night. Even if it’s an “if”.

I probably shouldn’t have even commented on the negatives of having part of the Sydney bulletin presented from Brisbane then even if it is for only one night. Sorry David.

We shall continue to monitor the situation as the week progresses.

There was a great promo a few years ago (I believe by Rob McKnight when he was with 9) where they were promoting that 9 were first to the big stories.

From memory, they showed 9 reporting on the fact that a fuel price increase was coming and that 7 didn’t report it… then showed 7 only report the story after prices increased. The point was that 9s viewers were better informed.

Wouldn’t put it past a good promo director (if Tony presenting Sydney’s weather became a regular thing) to make a promo in the same theme. “While their (7’s) weather gets blown in from Queensland, we’re on the ground with your only local weather forecast… tonight and every night” or something like that.

Remember, 9 Adelaide also made a similar promo when 7 moved their arvo news to Victoria for a while.

Might be off-topic or unrelated but I can recall at least one time in 2007 when Sharyn Ghidella had to present the Brisbane news from Sydney; she was unable to fly home due to complications surrounding her pregnancy (at the time she was also reading the news on Weekend Sunrise). Sport was still presented from Brisbane, though.

It was still possible for the Brisbane bulletin to be produced from the Martin Place studio in Sydney because QLD was one hour behind NSW at the time. 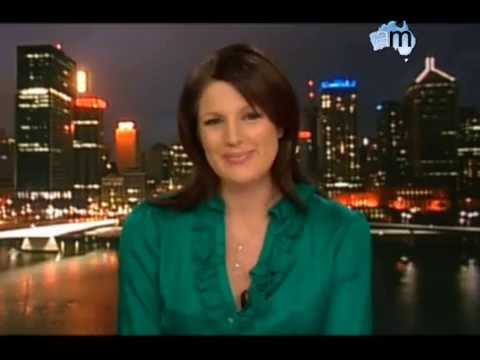 And Tony has featured on national bulletins and Sunrise previously.