Also, the show has set up a Spotify playlist.

Intriguing flashes of the wedding that is to come open the series… the flower girl running, blood on the wedding dress, the flash of a knife… Yet before we discover who might be the collateral damage, we pick up the story three months earlier…

A bride’s perfect wedding turns deadly after one of her bridesmaids unwittingly invites a malevolent stranger into their lives, triggering a life‑threatening chain reaction that blows open a hidden world of intimate secrets. In this addictive, six‑part, romantic thriller, the power of female friendship could prove the difference between life and death.

Amid the vines of a picturesque family winery, a playful and dreamy wedding proposal from devoted Alex wins over his down-to-earth bride, Olivia. Would- be bridesmaids Saskia and Melanie, who couldn’t be more different, are at Olivia’s side. It should be the happiest of days. But each of these best friends hides a life-changing secret, several of which are about to explode.

The proposal is a wake-up call for married-with-kids Melanie and she ends her affair with a charismatic stranger, Jakob. When he continues to pursue her, fearful Melanie lashes out, and her fighting back triggers an escalation in Jakob’s behaviour. As his monstrous true nature is slowly revealed, Jakob begins to target those closest to Melanie: her husband Michael, her kids, and Olivia.

Meanwhile, Olivia buries the real reason for her reticence to marry Alex in wedding preparations – until she discovers that Alex has been unfaithful. Olivia calls off the engagement, and throws herself into helping protect Melanie from Jakob, defiantly putting herself in the firing line.

Saskia harbours a secret that threatens to derail her legal career. When fellow lawyer Alex begins to investigate, Saskia goes to extraordinary lengths to keep the truth from being revealed. The men of the series have secrets too. Alex, the groom, is concealing the truth of his past, while knockabout Michael, Melanie’s husband, harbours a simmering resentment.

As the series reaches its climax, the men reveal they are capable of more than we thought.

As the series’ timelines come together, must-see intrigue builds…

Whose blood is on the wedding dress we saw in the series opener? Who will make it out alive, and who will pay the ultimate price?

Secret Bridesmaids’ Business is a taut, action-packed story of tangled secrets and dangerous obsessions. Its distinct tone blends wry wit with compelling friendship drama and hooky thriller genre elements from which audiences will not be able to look away. 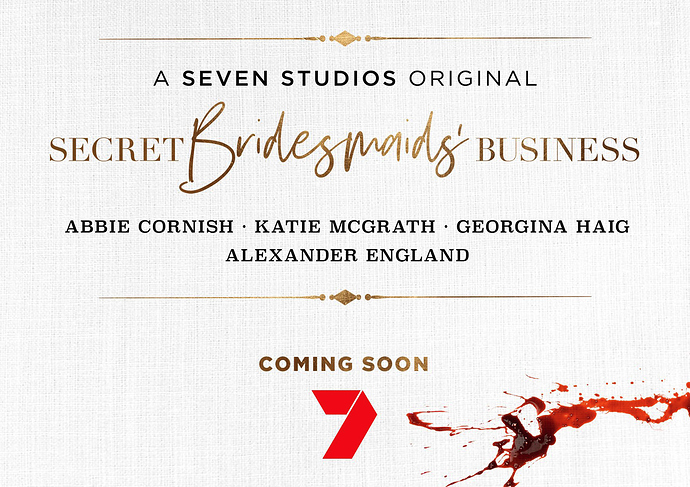 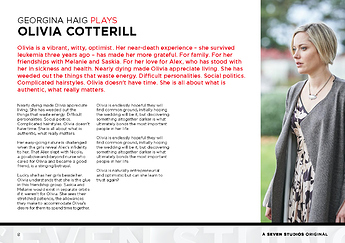 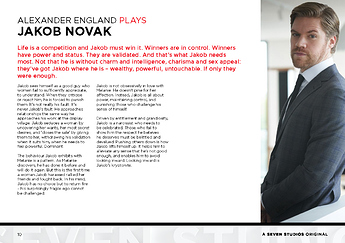 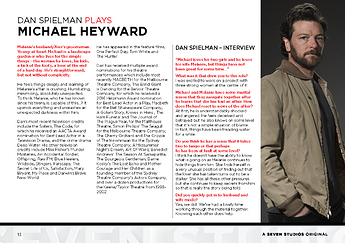 Seven makes a bold move with its new drama to keep viewers hooked.

Looks good. We need Aussie drama to make a return to commercial TV

Premieres Sunday week (September 29) at 9pm, continues on Monday and Tuesday, according to a promo shown during the AFL tonight.

So the show will be over in 2-3 weeks. Why rush through it?

I think Seven’s plan is to show three episodes in week 1, then just one episode per week after that.

That’s too much of a commitment for viewers. They’re not going to watch the same drama, three nights in a row.

If it’s Sunday then it’s also going directly against Black B*tch Total Control which is a stupid programming move.

Looks like late start times on all nights as well.

Way to kill off one of the best looking dramas they’ve produced in a while, nice one there 7.

Seven need to bring back Aussie dramas on Tuesday nights as they had done for a couple of decades. Make that the night they screen Aussie dramas and make sure they start at the same time every week.

You need consistency so viewers can remember and find the shows.

I just saw the strangest digital billboard for this show in Brisbane, it only had a few of the cast names, the logo and that it was a Seven Studios production. No Ch7, airdate or anything. Interesting approach!

Isn’t that the same as when they’ve run ads in the past with “Coming Soon”?

Sure - but the difference is in that instance people are watching Ch7, additionally the airdate is already known, so why not promote it?

Moreso my surprise was the lack of the 7 logo anywhere for anyone to identify it was on that channel, and just the use of “A Seven Studios Production” which I doubt means nothing to most people currently.

Surely they’re bright enough to make a connection between A Seven Studios Production ” and Channel Seven. Can’t be that difficult.

7 omitting their famous red ribbon logo from outdoor advertising (I could understand if it was only within one or their own assets) is kind of a big deal IMO.

Whilst I don’t think you’re wrong with people making the connection, at least for media savvy or interested people, it’s definitely an interesting choice by the network who has struggled to launch any new decent shows in the last year or two.