Olympics dominating Saturday viewing. It was Seven’s highest network share since the 2020 AFL Grand Final. Nine held up ok but the other three were decimated.

Seven News topped the night with Seven winning all markets and at the same time there was a sizeable audience watching Olympics on 7Two at the same time. It was Seven’s highest rated bulletin of the year for the 5 cities as well as in Sydney and Adelaide. Weekend Sunrise also recorded the biggest breakfast audience of the year and the largest since March 2020.

The AFL did well on 7mate, especially in Adelaide where 100,000 viewers saw the Crows beat the Hawks, even though the Olympics were on.

Huge ratings for the Olympics dominating the 5-city metro on day 1.

Wonder what happened to the AFL on Saturday night? Should have done well in Melbourne at least. Was on 7Mate. Maybe some of that Olympic audience was actually AFL in some states.

Is that a record audience share for a multichannel or have the ashes or something similar done better,

have the ashes or something similar done better,

Think once the Ashes on 9Gem beat Nine’s main channel before. Once again it highlights the fact that exclusivity reigns supreme in this day and age and no Fox interfering. It also allows Seven to have full online rights so you can watch it online to avoid some of their sub-par commentators.

Crazy seeing a multichannel with the 2nd highest share of all channels.

Olympics did its job last night. Be interested in the timings and the differences of “feeds” but from morning to late night seems like a lot of eyeballs tuning in.

Is that a record audience share for a multichannel or have the ashes or something similar done better,

So very close but surely through this games we may see it broken.

Exceptional ratings for the first day of the games. I know networks don’t like these big two week one off events but surely it goes a long way for prestige as well as monetizing and building up streaming. They’re really pushing it so the online numbers will be huge.

Paris will be lower but LA will have finals during our day time so that will surely be attractive. And the bidding war for Brisbane will be huge!! You wonder if a streaming/FTA alliance can do a big super 6 games bid from 2024-2033 (summer snd winter)

Huge numbers for the Olympics - on both Seven and 7Mate.

The coding for the games look like this: Morning; Afternoon; Late Afternoon; Evening; Night; Late Night. I wonder what the time allocations are for these “segments”.

Nine actually didn’t do too bad against the ccompetition. Well, for the 5.30-8.30pm slots at least.

Ten. Well, those shares were kind of expected. With the rubbish on offer.

By way of comparison, the first Saturday of the Rio games that featured day 1 highlights and the start of day 2 events saw Seven with a 42.2% share.

Also helps having 3 cities in lockdown.

1.3 million for news on a Saturday. Incredible!

Paris will be lower but LA will have finals during our day time so that will surely be attractive.

This shows the times of each session - it also combines the three channels that may have had coverage. 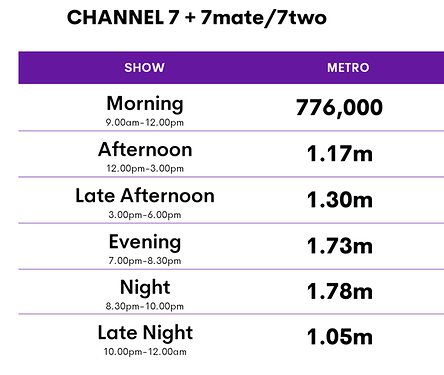 Good find. Thanks for posting that table of the times of each session and the combination of the 3 channels. It does clarify a few things.