The pandemic has fast turned this nation into two countries - the COVID states, and the COVID-free states, with border closures now a brutal necessity. So, how does Australia stay united ?

Also, it is vital we can trust our sources of news and information during a pandemic. Conspiracy theories, fake news and the influence of big tech are all under the microscope, as a new code comes into force requiring the digital giants to pay old media for news content. Will that solve the problems?

And we look at media diversity, as a scathing new report on the lack of diversity on Australian television screens is due to be released. 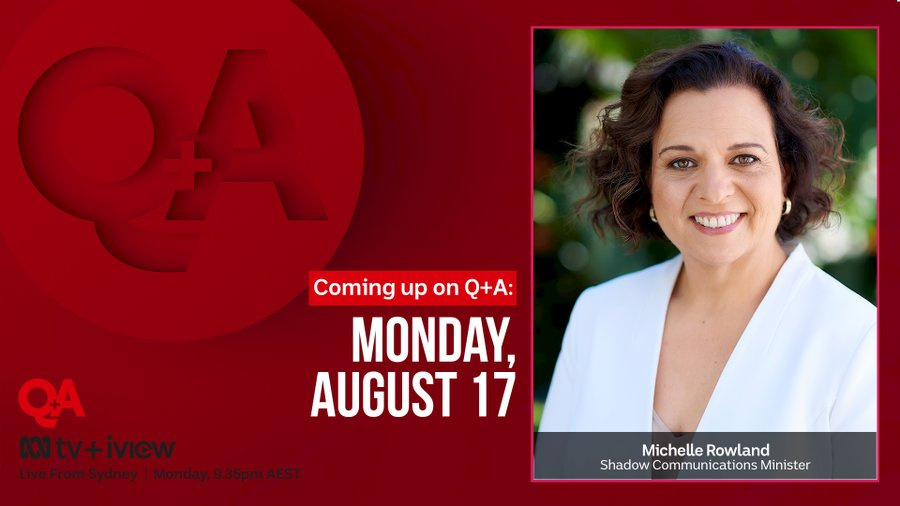 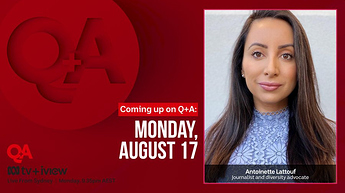 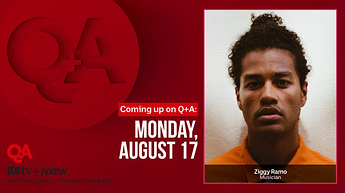 Indigenous musician Ziggy Ramo takes the ABC to task on Q+A, saying he was told he wouldn't be allowed to perform a song, which contains controversial lyrics about the Anzacs. WARNING: This story contains language which may offend some readers.

Over the next two weeks, Q+A is going to hear from some young, and some experienced leaders. Submit your question via the #QandA website: ab.co/2OfVDC0 https://t.co/vjnNGghhOW
TV.Cynic August 20, 2020, 11:20am #613

Even before COVID-19, young Australians faced an uncertain future.

This pandemic has exacerbated many of the issues young people were facing and it’s no wonder increased numbers of young people are fearful and anxious about the future.

So, what’s the way forward? This week, we bring together a panel of young Australians and some of our younger elected representatives to discuss how they overcome the economic and social challenges they’re facing. 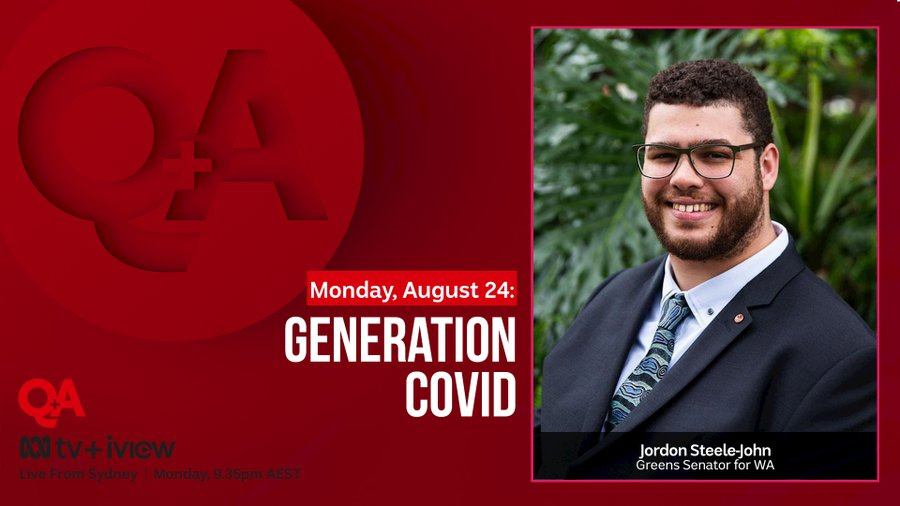 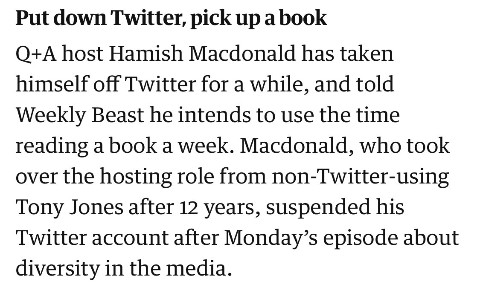 This week we draw on the collective wisdom of some highly respected Australians.

How do their life experiences shape what they take away from this COVID-19 crisis? Where do they think our focus should be right now? How do they imagine our future? How should we tackle the big issues facing the country at this time? 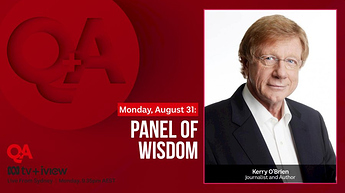 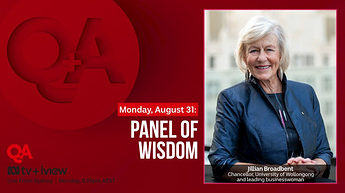 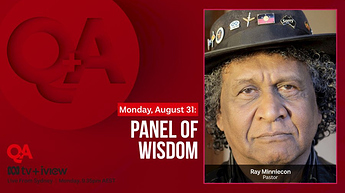 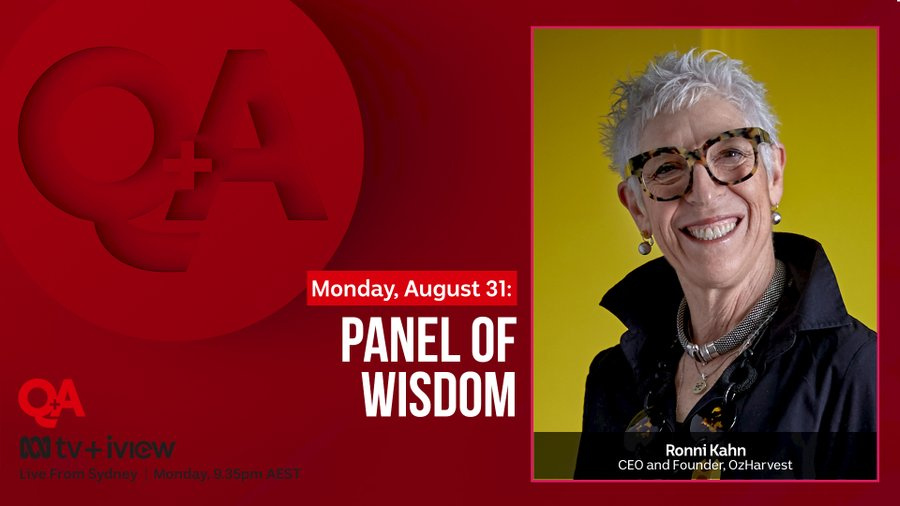 The political battle over state borders is heating up. The Premiers are standing firm but the Prime Minister wants interstate travel to resume by Christmas.

And thousands of Australians remain stranded overseas faced with a cap on international arrivals, soaring ticket prices and quarantine costs.

So, who’s got the power when it counts? Are we getting the balance right when it comes to restricting free travel in the name of public health?

This week on #QandA, we're discussing borders both international and domestic - an issue that so many Australians are being impacted by. Submit your questions and stories by 9am Monday via the website: ab.co/2OfVDC00 https://t.co/dEdpIw8lrD 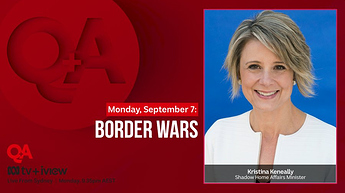 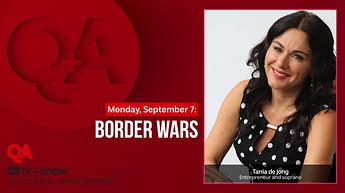 .@EvieIrie will close tonight's #QandA with a performance of her single 'Little More Love'. https://t.co/4nXvpWloYm 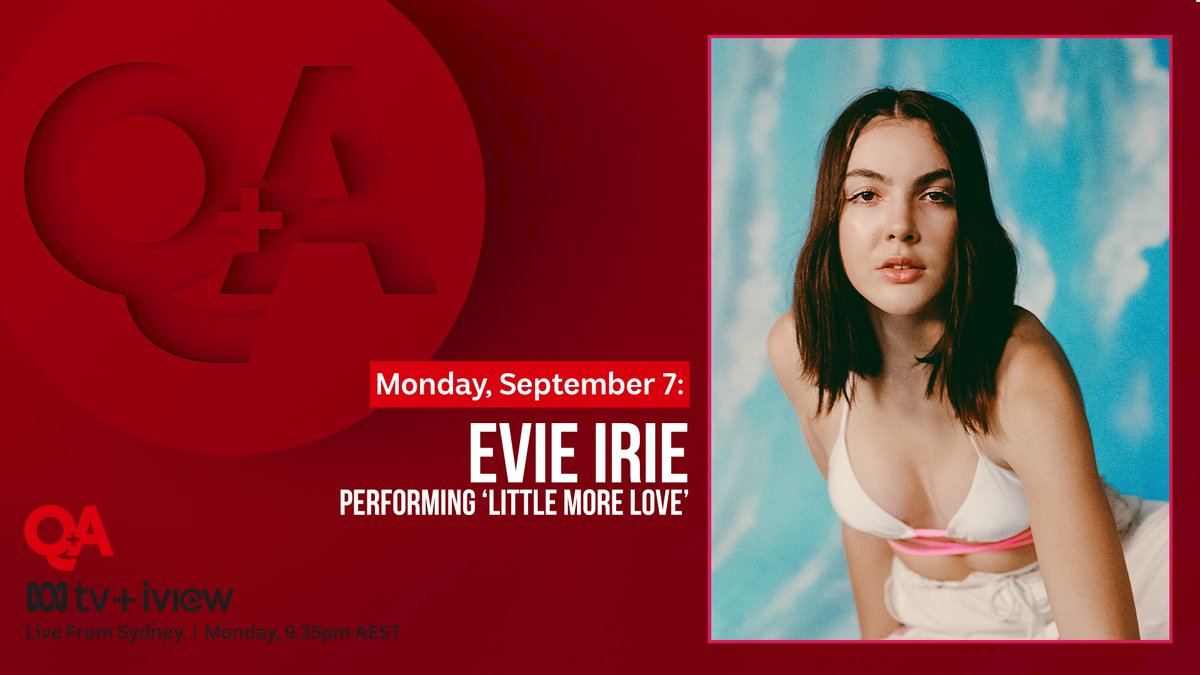 The Age of Loneliness

Even before Covid-19 arrived, a quarter of us were feeling lonelier than most. Now the pandemic is cutting us off from our communities, our workplaces and each other.

Loneliness is predicted to be the next public health epidemic of the 21st century. We’re interacting online more than ever, but our sense of isolation is growing. On the flipside, some now crave solitude, desperate to escape the noise of overcrowded households , bad news and social media chatter.

So will this pandemic force us to deal with loneliness, on a personal and political level?

What sort of politics could make us feel more connected? Does technology bring us together or keep us apart? Are we losing our ability to have an inclusive democracy? And how do we regain a sense of community during an epidemic which demands social distancing?

ACMA rules no breach by Q&A over lack of perspectives, language & inciting violence. 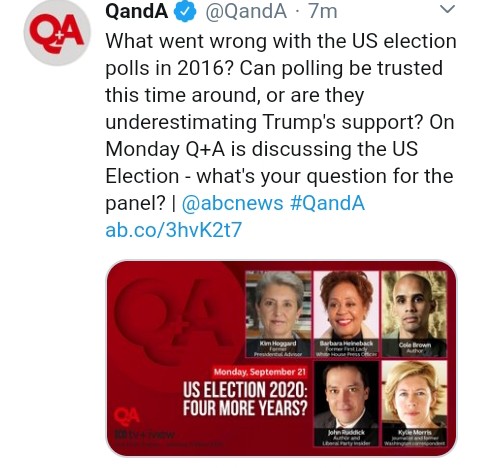 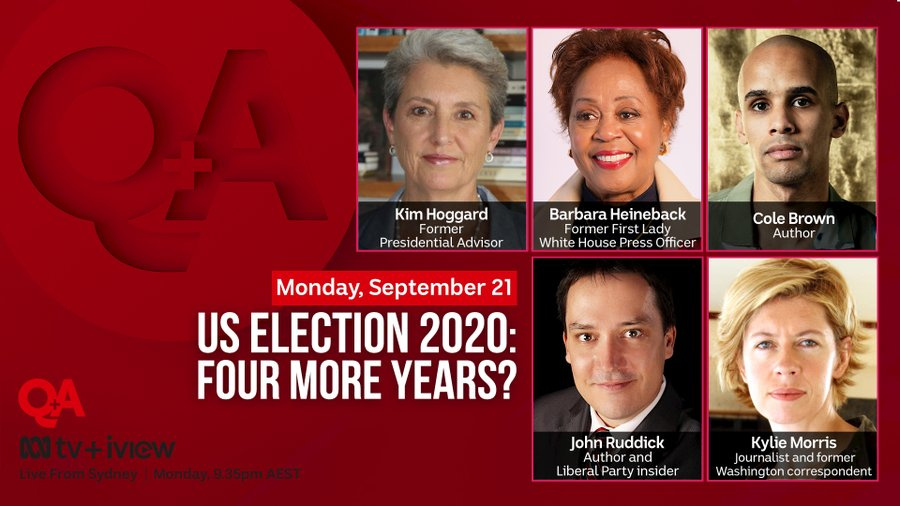 Six weeks out from the US Presidential Election there’s one question on everyone’s mind - will Donald Trump be in office for four more years?

His handling of COVID-19 has been widely condemned and racial tensions have sparked protests in many American cities.

Polls suggest Democratic nominee Joe Biden is leading the race, but President Trump has form when it comes to defying predictions.

Joining host Hamish Macdonald - key figures who’ve worked inside the White House on both sides of the political divide.

How serious is the threat of civil war? What would a second Trump term look like? And how would it affect us in Australia and the long term power struggle with China? 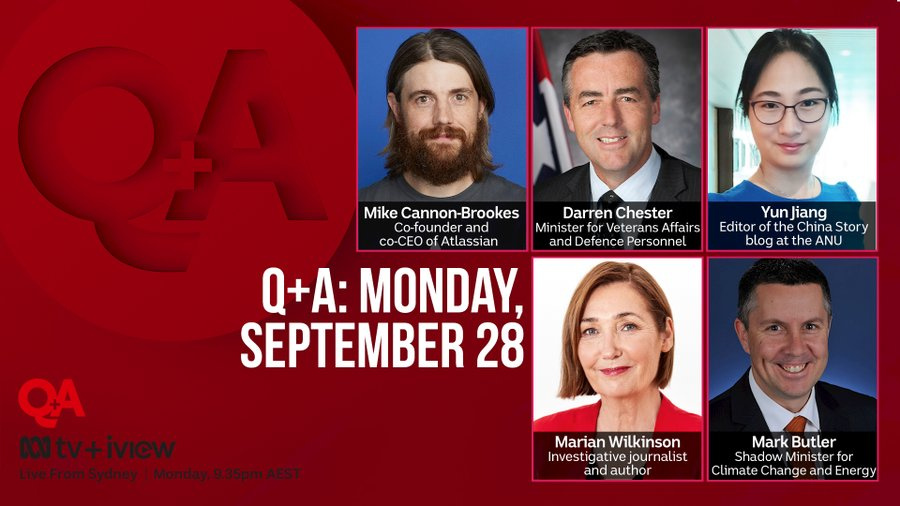 After the devastating impact of bushfires and COVID-19, what should our economic recovery plan look like?

The Government has unveiled its Technology Investment Roadmap, and reaffirmed its commitment to a gas-led recovery out of the coronavirus recession. The Opposition however describes it as a “Road to Nowhere” and wants renewables to be the focus. So where should our priorities lie when it comes to jobs and growth post-pandemic?

Our relationship with China remains in the spotlight, with tit-for-tat deportations of journalists, bans on Aussie agricultural exports and an announcement by President Xi Jinping that China will reach net zero emissions by 2060.

All as Australia braces for the next bushfire season.

Yun Jiang, Editor, China Story blog at the Australian National University; Yun Jiang is the director at China Policy Centre, an independent research organisation, and the editor of the new China Story blog, which publishes analysis and commentary on China issues.

With a musical performance from Alex the Astronaut 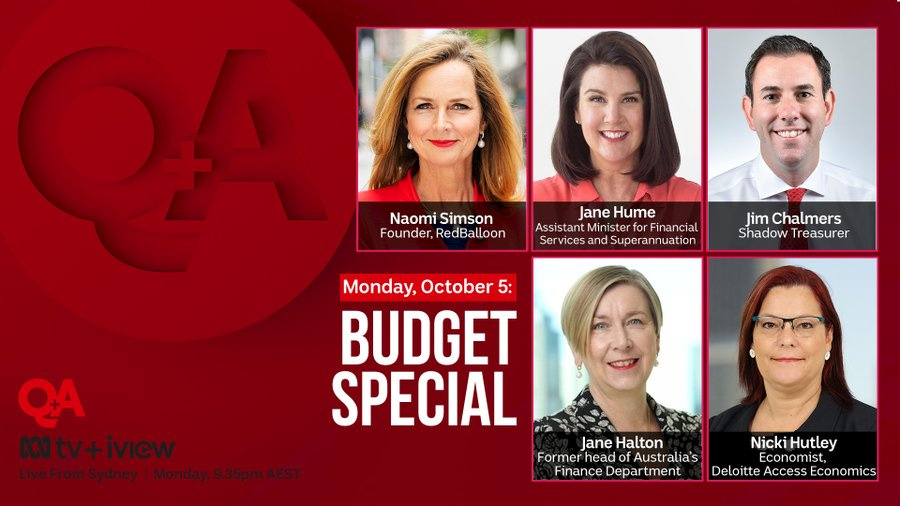 Next week’s budget will be unlike any other. Our gross debt has now soared past a record-breaking $800 billion, and somehow the Government must support the economy and plan a recovery amidst a pandemic still throwing up unknowns.

It’s one of the most important budgets in our history, similar to finding a way out of war and back to peace time.

So how will the Government meet the challenge? How long will financial support remain in place? What is the plan to get Australia working again?

Last night’s show finished with a tribute to the late Helen Reddy, with Mahalia Barnes and band performing I Am Woman.

Mahalia Barnes pays tribute to Helen Reddy with a rousing performance of I Am Woman live on Q+A, with help from her band Ben Rodgers and Clayton Doley, and backed up by singers Prinnie Stevens, Joy Yates, Juanita Tippins, Lyric McFarland and Rebekah Jensen. https://t.co/I7dY6UfhKG
1 Like
TV.Cynic October 7, 2020, 3:02am #625 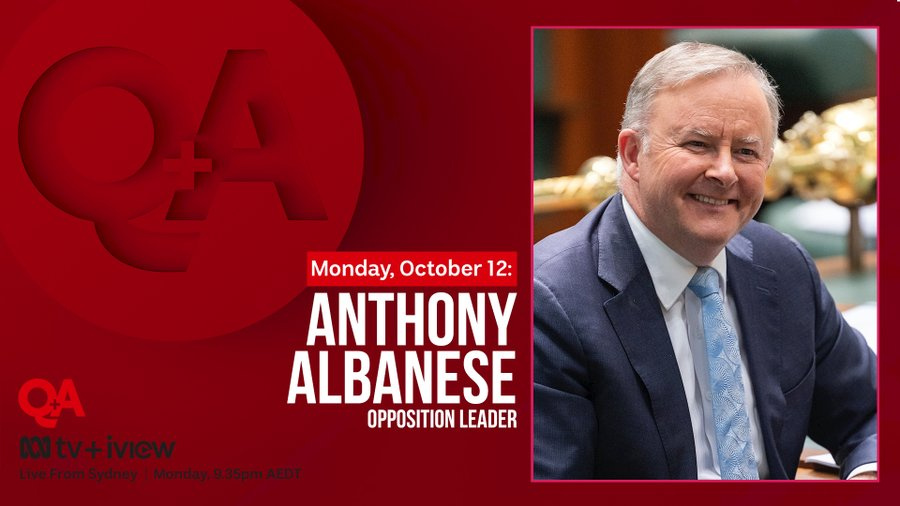 Next week on Q+A, a one-on-one special with the man who wants to be Prime Minister - Anthony Albanese.

It’s a tricky time to be in Opposition, while we’re consumed by the pandemic and those leading us through it.

But now Labor’s leader has pledged to change tack and start providing an alternative.

It’s now or never for the Labor Leader – and next Monday night he’ll face the Q+A audience to take your questions on how he’d lead Australia out of the pandemic.

Next week on #QandA, a one-on-one special with the man who wants to be Prime Minister - Anthony Albanese. You can submit your question for the Opposition Leader via the website now: ab.co/2OfVDC0 https://t.co/4x8k2FkkWZ

Sarah Blasko will perform 'All I Want' from her 2009 album As Day Follows Night to close Monday night's #QandA. Tune in from 9.35pm AEDT on @ABCTV. https://t.co/cReZ3zFVre 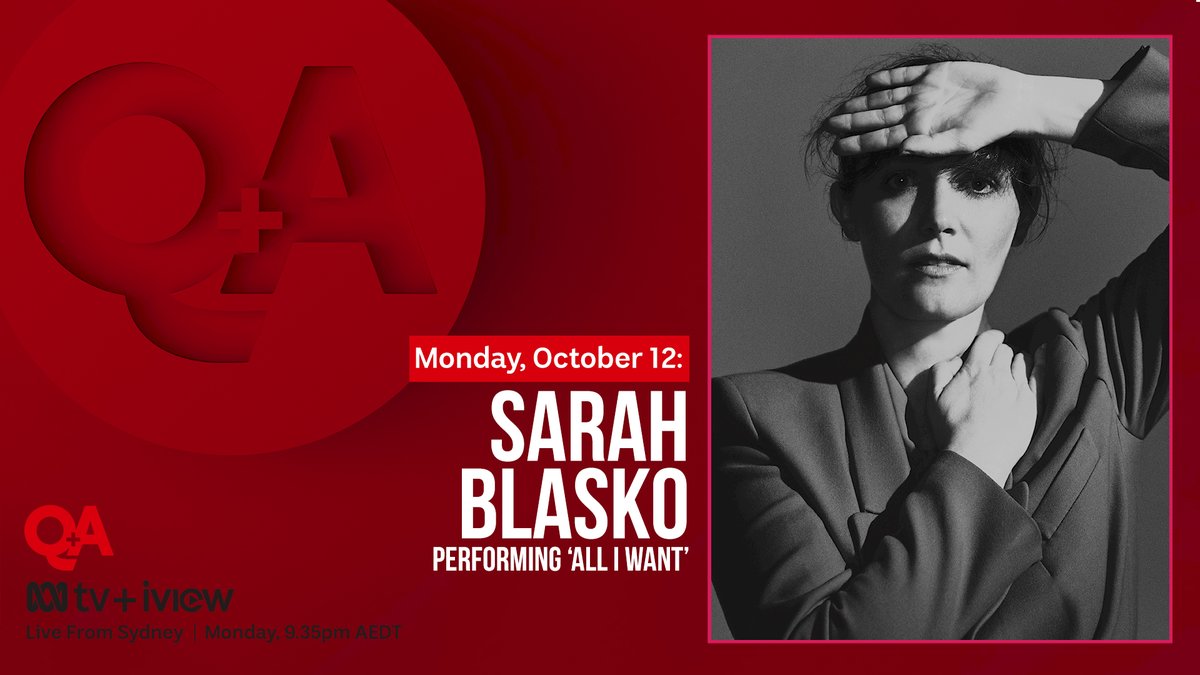 Tech designers have control over how billions of us think and act, and some of them have started sounding the alarm on their own creations.

Reports show higher social media use is now linked to a decline in mental health.

Political disinformation campaigns on social platforms are on the rise, undermining democracy in some countries.

So how do we stop social media from reprogramming our lives and take back control? Is government regulation the way to go?

How do we retain the positive aspects of connectivity and people power that social media offers? 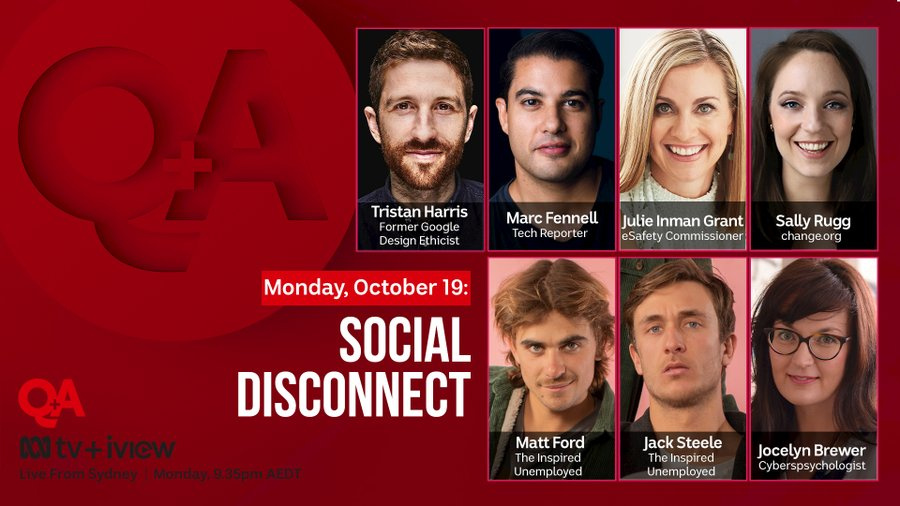 The Guardian Australia has speculated that the show could move to Thursdays next year, to improve the channel’s flagging ratings on that night.

Is ABC forum on the move to Thursdays?

That would be quite interesting. Monday night ABC-viewing has been a staple of mine for many years but I would also tune in on Thursdays to the ABC if it were to air then. 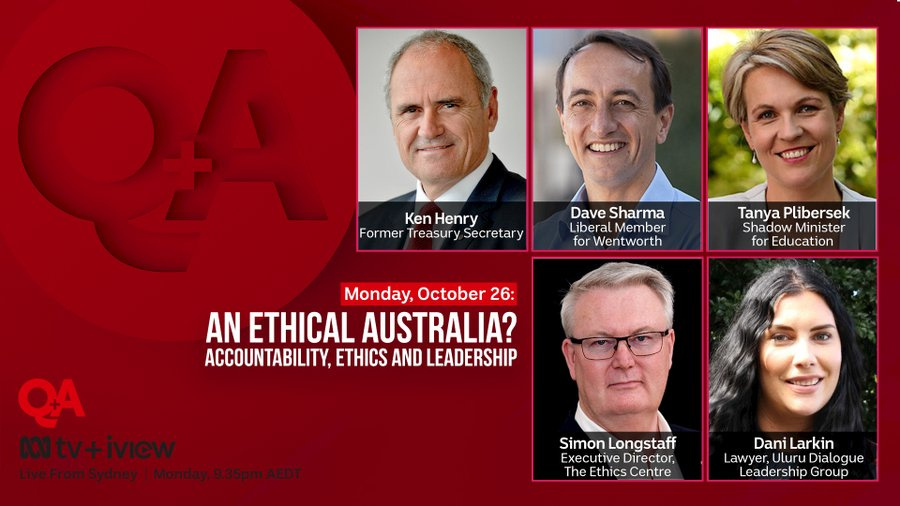 Accountability, ethics and leadership in the time of the pandemic.

In these challenging times, who holds the powerful to account? Are the standards of our political leaders slipping as we grapple with the COVID crisis?

The Premiers of two of our key states are both under mounting pressure. In NSW, Gladys Berejiklian faces questions over her relationship with disgraced former MP Daryl McGuire, while Victorians are demanding greater accountability from Daniel Andrews over the hotel quarantine debacle. Is a federal anti-corruption body the answer?

And with public trust in our politicians and institutions like the banks at an all-time low, how do we achieve a more ethical Australia? Could we embed ethics into all levels of society? What are the principles you try to live by, and do you see them reflected in national institutions?