Yeah but what was Smith saying it about?

I assume he wanted a set restart

Queensland has won the series 2-1

Queensland won the State of Origin decider 22-12, in front of a sell-out crowd of 52,385 at Suncorp Stadium, despite losing two players to concussion early in the match (Selwyn Cobbo in the 2nd minute and Lindsay Collins in the 4th minute), and a 10-12 deficit at half-time. The Maroons also had two players (Cameron Munster and Murray Taulagi) in isolation after they tested positive to COVID at the weekend.

Well done to QLD, marquee players for them like Cherry-Evans and Ponga stood up for them when it mattered most when Cleary and Tedesco did not for NSW.

Well deserved man of the series as well. 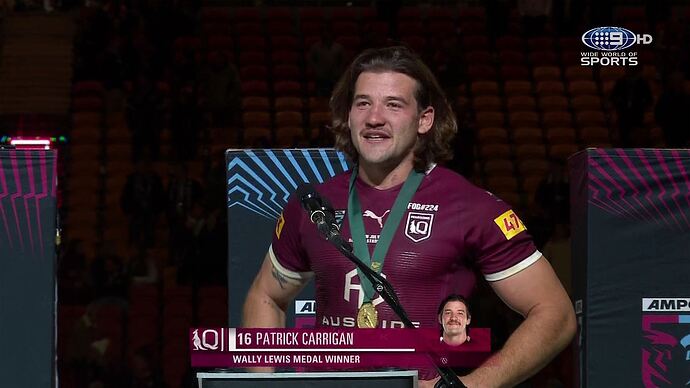 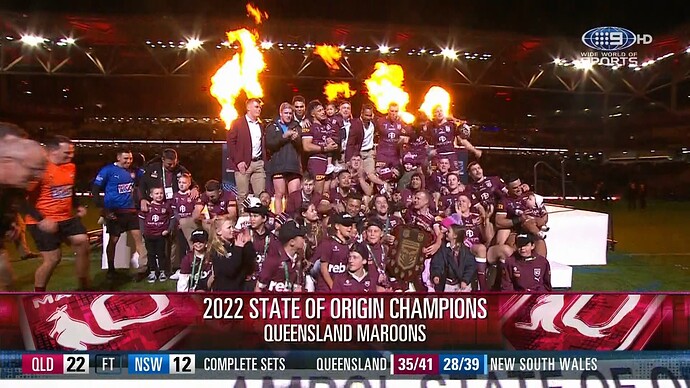 The best Origin I’ve seen in my opinion.

Commiserations to NSW. They started off well. After leading at half time they capitulated. A Ben Hunt smother has sealed the QLD victory. Had NSW blues not made mistakes in the final few minutes of the second half, they would had the chance to win the match and would have retained the Origin series.

It was definitely the toughest game I’ve seen for quite a while.

QLD just wanted it more in the end, they overpowered NSW in the last 20 minutes with more spirited attack and better defence.

The scuffles took a bit of shine off of it as an overall spectacle.

I know I’m late with this, but gee it was great to be a Queenslander today.

The Roosters have (sadly) beaten the Dragons 54-26 at Gosford this afternoon. No team has won the competition after losing 50 or more points. Damn you, Roosters!

On a brighter note, and I meant to post this earlier, I was happy with my Sharkies knocking off the Cowboys 26-12 last night

That was a win that I wasn’t really expecting.

I didn’t see much of the game however as I was out.

Looks like there will be a bid for a Pasifika franchise (led by Papua New Guinea) to join the NRL, competing against a second Brisbane team bid and a Perth-North Sydney consortium. 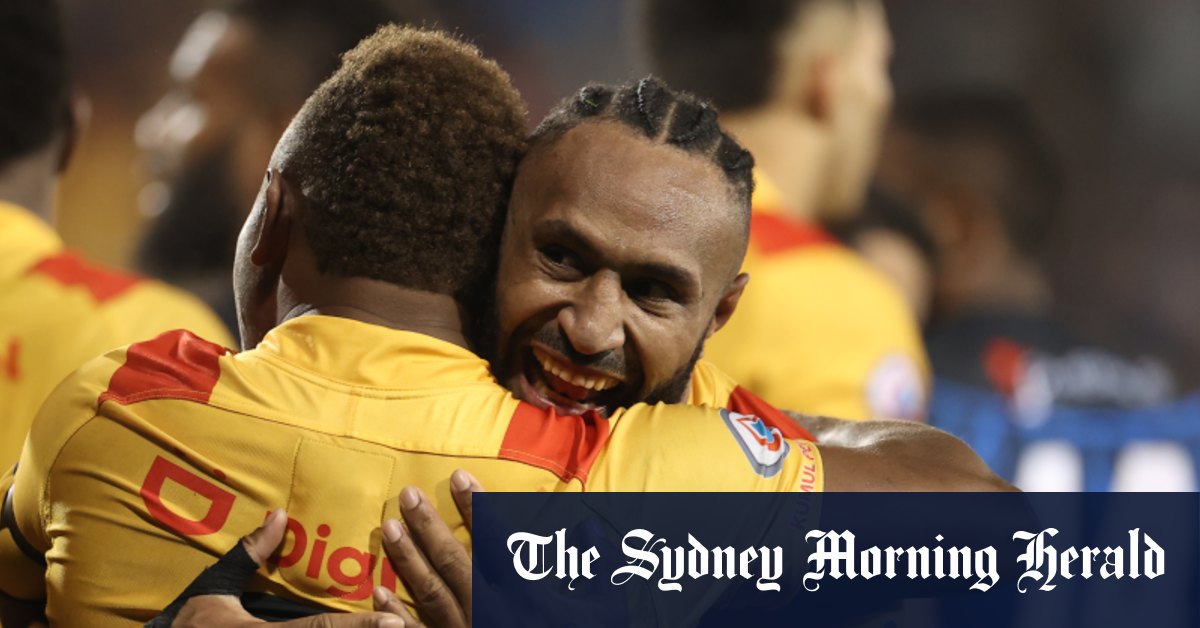 As the Australian government looks to combat Chinese influence in the Pacific Islands, plans are afoot for rugby league to follow the lead of Super Rugby and have a Pasifika team in the NRL competition.

A controversial finish between the Cowboys and Tigers match. With one second remainng, the Tigers lead by one point. It was a short kick-off. Just then, there was controversy where there was a possible escort. How could this happen? The Wests Tigers were deprived of an upset win when Valentine Holmes kicked the match winning penalty goal.

I didn’t really think it was an escort. The Tigers player penalised only had eyes for the ball and not deliberately shepherding the Cowboys player off the ball… I think Wests were hard done by there.

All that came after 2 late Tigers tries to put Wests back in front 26-25 and then the Captains Challenge from Nth Qld to get the late penalty goal on the siren.

Can you Captain challenge full time? Interesting. I think the ref needed to make a decision first ie play on tackled then full time. Instead the ref was already talking to the bunker and then the cowboys called for a captain challenge?

It was an exciting game as an eels fan I was not fussed on the result.

Can you Captain challenge full time? Interesting. I think the ref needed to make a decision first ie play on tackled then full time. Instead the ref was already talking to the bunker and then the cowboys called for a captain challenge?

I thought the ref was only talking to the bunker AFTER the Cowboys pulled their Challenge, the ref was otherwise happy to blow the whistle full time (ie. no Tigers escort) which would have given the Tigers the win.

ABC’s report this morning. Who would have thought so much could happen at 79:59 with one second of play to go. NRL boss Graham Annesley says the bunker was wrong to award North Queensland a late penalty as the Wests Tigers threaten to appeal the result of their final-second loss to North Queensland.

Interesting how different commentators chose to report the news. 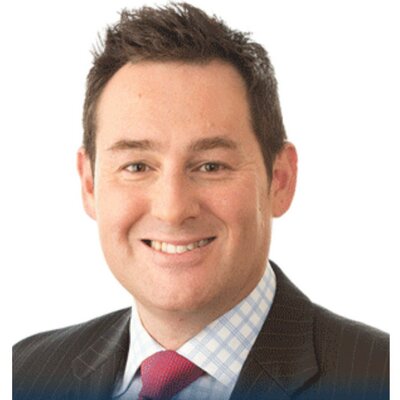 @MarkGottlieb
Graham Annesley has backed the decisions of referee Ashley Klein and the Bunker to allow a Captain's Challenge in the Cowboys win over the Tigers. #NRL
2 Likes
JohnsonTV July 27, 2022, 2:00am #2556 The Titans part ways with Kevin Proctor after he posted a video on social media of himself vaping during the club's match against Canterbury on Sunday.

Ashley Klein has been dropped as referee for this weekend’s matches after his howler in the Cowboys-Tigers game. 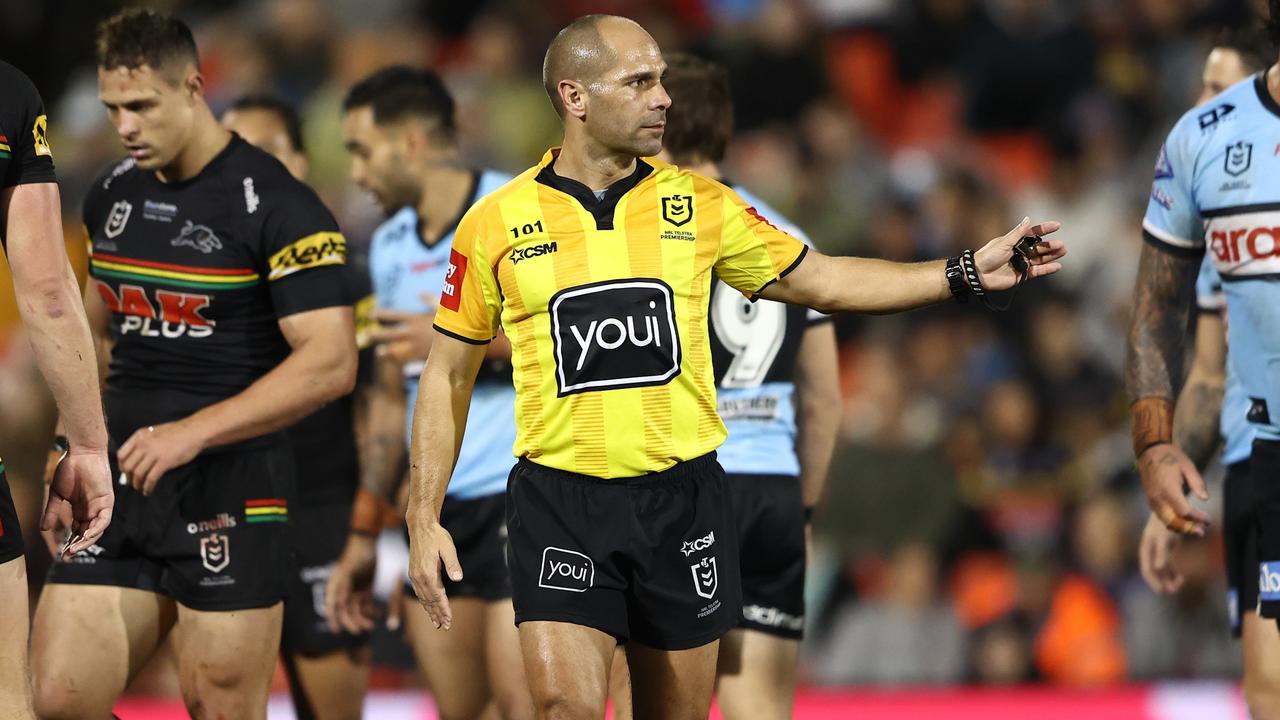