I think 2ky had coverage

Loved Hollywood (Greg Hartley) and Zorba (Peter Peters) and also Vince Sorrenti during prerecorded amusing insights on the happenings in the game.

WOW when 2GB ruled the NSWRL radio waves, then that auctioneer taxi driver with fake teeth and his cronies from the Daily Mirror took over around 1991 as Peters and Heartly had to go to 2KY .

Takes you back with that awesome theme music (I do not know the name of it), I know they brought it back to MMM when they did Origin in I think it was 96? or was it much later …

Of course, the taxi driver was at 2UE, not 2GB. And he was a racing and general sports presenter before 2UE changed the name of their rugby league coverage to the Continuous Call and he took over.

Advertisement in The Sun-Herald, Sunday, June 16, 1985. This was the second and last year of Frank Hyde’s time at 2UE. John Brennan and Rex Mossop called the rugby league for 2UE in 1986. 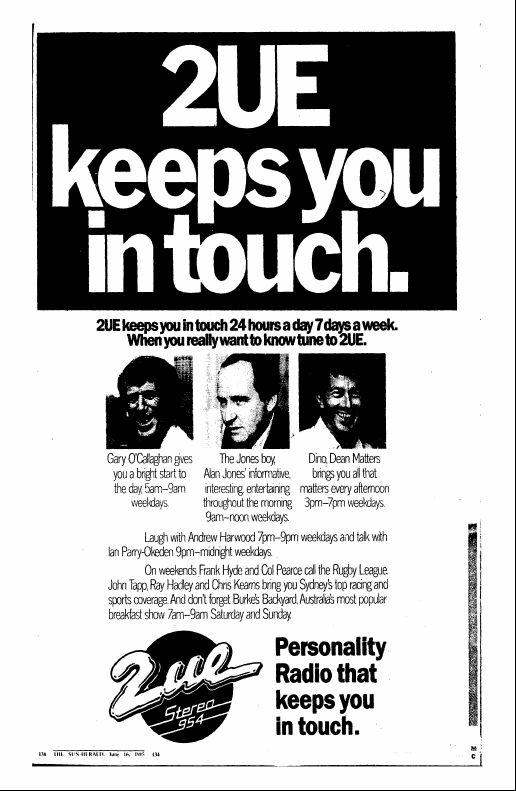 Ray Hadley started on 2ue in 1988 I think. Then GB in the early noughties. I think Ray Price was part of that original team and they did actually talk footy.

For 2GB I am not sure who took over from Hollywood and Zorba and when. I know during the super league war, it was Jon Harker who did the rugby league. This is when 2ue lost rights, and Ray took the show in a different direction making it more of a variety show as they were not allowed to call the footy.

This is just from memory, I am sure I may have mixed up some times. There was period when Peter Wilkins was on 2gb before Ray came over.

I think the photo was from circular super league times. 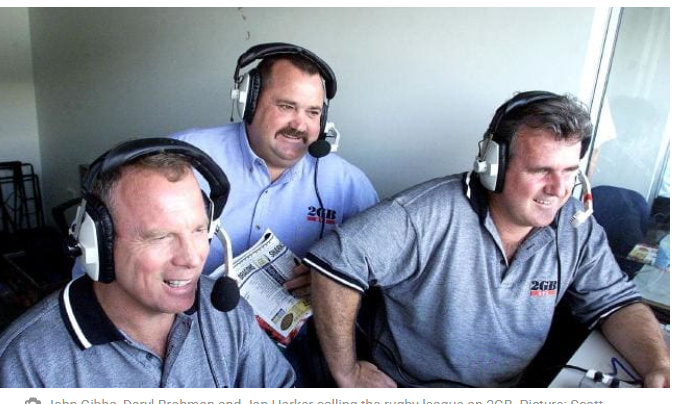 No one took oevr for 2GB when Peters and the former ref left to go to 2KY.

from memory the reason why 2UE did not get the NRL rights in 1998 (1st year of NRL) was due to the NRL Partnership (ARL & News Corp 50/50 ownership) because they both despised the fake teeth guy for his actions in 1995 through 1997 especially his show on Optus Vision “Sports Australia” Channel, so when the raio rights were awarded they were “exclusive commercial” to 2GB which had lured the ABC rugby league radio team

Either way the 2UE team tried toc all games off TV and News Corp put an end to that by cutting off their feed, which to me now that I am more deeply thinking about it was actually 2001 and not 1998.

Ray Hadley joined GB in Dec 2001. 2gb had exclusive commercial rights when the ARL / Super league became the NRL in 1998. Peter Wilkin was lead commentator in 2001 who came from the ABC. I think it was only a year he did it. Before I think Jon Harker (as lead commentator) called the games but 2ue always smashed them in the ratings (despite GB having exclusive rights). Peter Wilkins was meant to be the person to make the coverage more competitive with 2ue as he did quite well at the ABC. However Ray took over in 2002 and rest is history. Before exclusive commercial rights came in 1998 I think 2gb took a break from NRL coverage for couple of years, when Hollywood and Zoba moved to KY. If I get time I will see if I can do more research on this.

Ray Price was the captain of the eels back then.

Well in that case, I stand corrected!

Sterlo did captain the Eels at one point though, right?

Ray Price was the captain of the eels back then.

1986 he was captain then he retired that year after the win, Sterlo took over in 87.

Those of us that worked for Optus Vision at their Zetland (now Green Square) production facility, none of us really wanted to work during his live 7:30pm Wednesday show as the emails back and forth between premier Sports and our side were all like should ARL and News Corp make friends again that the shit would fly and that certain people would be blackballed from the TV media side.

I remember when Seven took over Sports Australia (early 1998) and we moved to Epping facility (Seven Studios Sydney) that he (fake teeth guy) and his two buddies tried to get a job doing a NRL show, TK (Terry Kennedy) and Steve Crawley (now HoS Fox Sports League) both said no and even though Optus had contracted Seven to do their allocation of NRL games in 1998 they (C&W Optus who has taken over Optus Vision and created the Consumer Multi Media (CMM) division) tried to get him a show on the Seven produced Sports Australia and do its Rugby League calling (neither happened as Seven could not find a spot for him).

In 1999 when Seven finally done a deal with Optus to take over as their sports broadcasting provider (I did not go across I was moved to Satellite division) to created C7 Sport that guy tried again to get a job but was told n nothing was available as Seven did not want any former Optus Vision reps in the C7 Sport team other than TK, Crawley and one or two others (whom I do not recall now) while the rest of the former Sports Vision was moved onto Premier Sports & Nine (a lot went to Nine).

I remember News Corp hated the fact that Optus had given Seven the contract rights to NRL as they thought they were going to get them for 1999 through 2000 but a deal could not be worked out and Seven instead got the deal and then subbed out the work to Terry Kennedy’s production company. If I recall correctly that is also when TK got the job at 2KY doing the Big Breakfast gig.

Wow that is taking me right back to bad and good times.

We want a new deal: Channel Nine tells NRL it won't make its next payment

Channel Nine has told the NRL it won't be making its quarterly payment on April 1 and outlined a desire to renegotiate its current broadcast arrangement to extend beyond 2022.

This would be a disaster for the NRL if the capitulate to these demands as they will not get a good enough deal if they were to extend an already bad deal with Fox and Nine.
But then again they may be forced to if there is a no game at all. Playing Russian roulette it would seem. NRL news as it happens on the developing situation regarding the COVID-19 global pandemic.

This would be a disaster for the NRL if the capitulate to these demands as they will not get a good enough deal if they were to extend an already bad deal with Fox and Nine.

Maybe not, ARLC does have one key item that they are not selling which is a huge asset for them.

What would that be worth?

The former NRL partnership also had such rights which News Corp used many times to ensure it continued to “own” pay TV rights but when the ARLC was formed News Corp gave them away to gain the 2013 pay TV rights.

In a world where advertising has been decimated and FTA networks are already in trouble? Who knows.

Currently? Nothing I suspect, especially if the commission is in the perilous position that is being claimed. That obviously changes once the current situation changes, but its potentially contingent on how long the shutdowns last.

That said, I don’t think they are as valuable an asset as they once were - it’s basically an expensive insurance policy. With financial pressures on broadcasters like they have been its potentially an extra cost that they could do without having to spend - its also potentially limiting to the sport’s future options.