Millsy back on 6PR Breakfast with Mark Gibson I reckon.

Needs to be a duo with a light hearted angle. Having Gibbo would allow him to tackle the harder news and Millsy would bring the fun.

Surely no one is thinking that Emerson is about to pop up on any BC or 9Radio shows with “expert comments”. He’s being paid to serve out his contract of a few months more and do so quietly.

4BC & 4BH last successfully broadcast from the Ekka in 2013 without any technical hitches.

Was nothing to do with me, just making the point.

Well as does 3AW which has been superior in OBs for the past two decades. Great to hear 4BC has done them well but overall a good production should just work and be slick without it being it having to be a praise exercise.

Patrick Condren did his show in 2013 at Ekka and it was networked.

Patrick Condren did his show in 2013

Patrick Condren did his show in 2013 at Ekka and it was networked.

To where, the Moon? certainly not to Sydney

To where, the Moon? certainly not to Sydney

Too the Queensland Stations… Prime, Grant, Resonate pretty sure 4KZ as well
The comment said nothing about Sydney.

@crankymedia your right… was 2014… In any event, It was successful and went to network stations regardless if it was the moon or sydney. 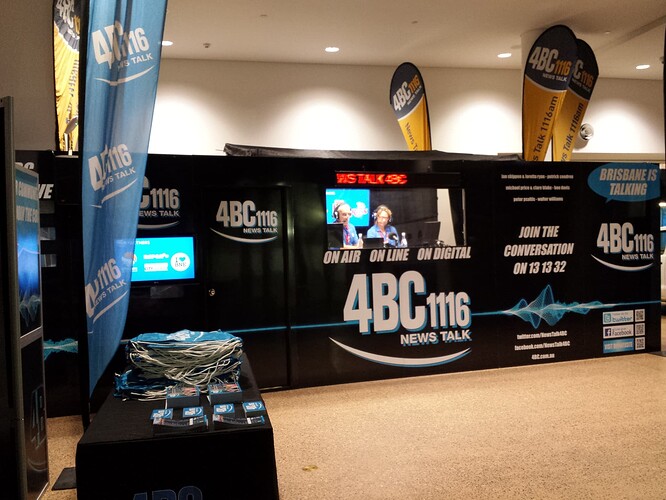 Matt Granland will fill in for Sam McClure on Sportsday Victoria for two weeks from today, with the latter on holidays.

The choice of music on 4BC has been repeatedly difficult throughout Thursday.

The shock suicide of Paul Green has been a difficult topic with on air talent Peter Psaltis, Neil Breen and others knowing Paul very well.

Some of the songs scheduled in the vicinity of discussion included ‘I will survive’, ‘Downhearted’ and ‘Don’t stop me now’.

This is a difficult week with staff at the Cannon Hill studios and program staff at the Ekka (Brisbane Ag Show). Perhaps when all under the one roof, program director Max Dudley would ask music director Brent James to schedule alternative tracks that don’t clash with breaking news topics.

Drive host Neil Breen chose not to acknowledge the tracks, probably the best way to professionally handle the matter without descending to Hadley territory.

Speaking of which, here is an article on Ray’s dummy spit earlier this week: Broadcaster Ray Hadley has issued an on-air apology to listeners after technical difficulties saw him storm off his show in the middle of a live broadcast.

Yes you always have to be on standby to adjust or reschedule if tracks don’t fit with the news situation of the day. On the day the Queen Mum died, a friend working at a UK station was called in to review the whole tracklist for the overnight automation that night and remove/replace any that were no longer appropriate, as well as generally tone down the overall tracklist so that it didn’t sound too happy!

I suspect Hadley might have been instructed to apologise and stay in Brisbane. He no longer has the kind of influence he had in the Singo days when this sort of behaviour seemed to be positively encouraged. Nine has a much lower tolerance level. Very unprofessional to be slagging off engineering and other staff on air anyway, you’re all part of a team and you should act as such to listeners.

Seems as though 2GB overnight host Michael McLaren is taking more leave. He’ll be away from his program for 3.5 months and replaced by Bill Woods.

We offer a diverse range of services to the Australian Commercial Radio industry and associated industries such as advertisers, recording studios, other program suppliers, producers and agencies. Our product range includes Radio Program Wholesale,...

Shane must have pictures of someone high up at 3AW in a compromising position.

Probably more a case of him being available at the right time.

AFL Record editor-in-chief Ashley Browne filling in for Sam McClure on Sportsday Victoria tonight. Ashley normally appears on the second hour of Thursday’s show talking about issues related to footy and the media.

Yet no mention is made on air of the music as a draw card. It’s scheduled towards the end of each half hour, buried amongst more frequent ad breaks. Often not introduced or back announced.

It seems an opportunity lost. No promos, no on air explanation at all.

Maybe because they still want to be a News Talk station & part of Nine’s News Talk network (as their logo says)?

They’re obviously trying the best of both worlds. Playing classic hits to keep ex-4KQ listeners happy, but not highlighting the change to keep the regular 4BC listeners happy.

Cannot wait for the next survey. My bet is 4BH will be more of a winner than 4KQ. At the end of the day, it’s the classic hits which ex-4KQ listeners want… not Hadley, Stanley, etc.