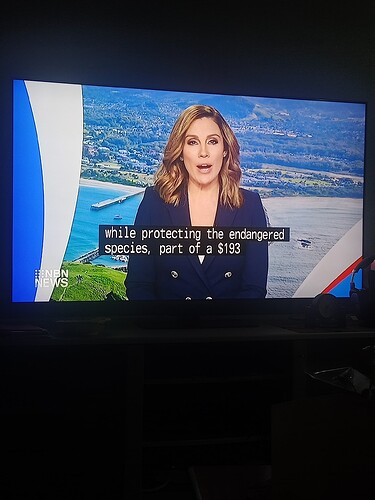 Thanks for the Mid North Coast News and weather preview on the Gold Coast tonight.

Seriously does nobody even care what goes to air?

Also going from a daytime shot (is it Port Macquarie?) to a night shot of Newcastle is very jarring.

Yep that’s what I thought too… of course, Mechie would know

Gavin says “Join us for NBN’s hour of news tonight at six” in his news and weather updates.

(Radiohead will be triggered by this)

Well it isn’t necessarily incorrect, but again another branding inconsistency.

I saw Gaven during today extra.

Gavin presenting LIVE on location from the floods at Singleton, with Natasha in the studio presenting other news. Live crosses to Maitland and the Central Coast too.

After that, Sydney flood coverage, but nothing about the Mid North Coast other than brief mentions during the Hunter coverage.

Then “we’ll have more coverage on the Hunter Floods later in the bulletin” then to local windows. No Central Coast window either or Central Coast news in the Newcastle window, which also included a Tamworth report. 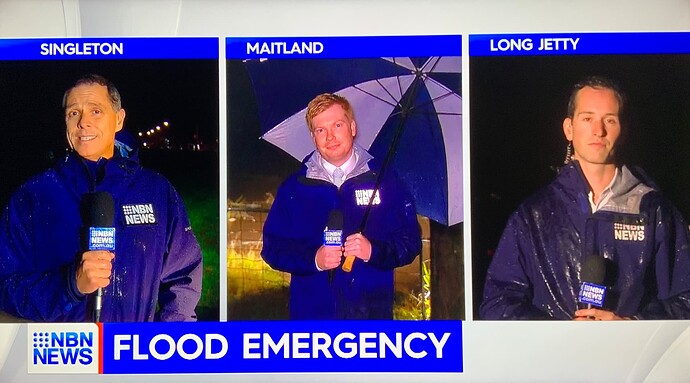 Mid North Coast was probably in the local windows

Nothing wrong with a pre-recorded cross at 5:44pm, I would have thought Nine might have turned off the clocks on some of the screens at the top of the picture.

Also note both “Hot Seat” and “The Chase” on screens on the right. 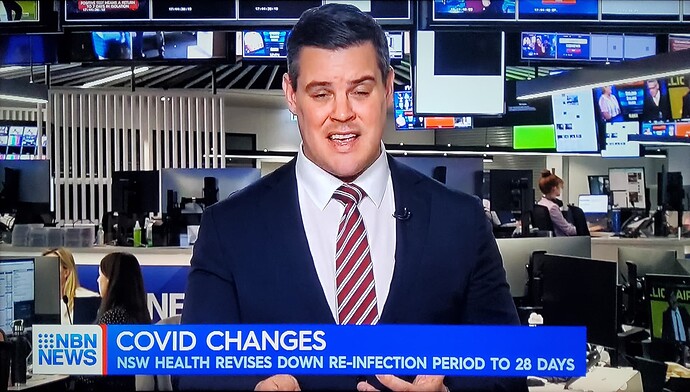 I don’t think that will be noticeable to the viewer.

Yeah I know, we are definitely not an “average” viewer!

Unusually, NBN News didn’t have a cross to Hunter Stadium for tonight’s Knights home game. Their only game preview was the prerecorded one with James Bracey and Andrew Johns from the Wide World Of Sports studio in Sydney.

Got to love the branding consistency

Also, Gavin Morris regularly appears on Weekend Today as “9 Weather Presenter”, but I noticed the other day when he was on Today Extra in their news discussion segment, he was introduced as “NBN News Anchor”.

Agree, its been a dogs breakfast for years, at both the network and local level.

They could go a long way to resolving this mess by branding it as NBN Nine News (short of ditching the NBN altogether).

The introduction of the 7News brand to northern NSW should hopefully be a wake-up call for Nine to drop the NBN News brand.

They’d be stupid to do that considering the heritage value of that brand in that part of the country. However, they did axe an extremely popular presenter in Paul Lobb so it is entirely possible another dumb, damaging decision could be made.

They might pull the trigger once they finish the NBN News rewind series. Besides, they hardly present a lot of local stories anymore. Most of the bulletin is national stories. If they really want the NBN News brand to stay, then they should show it some love.

Besides, they hardly present a lot of local stories anymore. Most of the bulletin is national stories.

The interesting part to me is what impact adopting the 7 News brand will have in those northern markets. If those ratings go up, Nine might well do the same with NBN News brand, or at least transition to a hybrid “Nine NBN News” brand.

That’s a good point @Radiohead but nine implementing this strategy is another story.
I wouldn’t mind if we had a 9News sign off for at least national stories, saving the reporters some time as they will only have to record just 1 sign off.
I remember watching a YouTube video from @SouthCoastTV where a 9News reporter signed off as NBN News when he was ment to sign off as 9News.

They’d be stupid to do that considering the heritage value of that brand in that part of the country.

If it pays off for Seven branded Prime bulletins, then I can see Nine eventually pulling the trigger on NBN News.