The new season of Married At First Sight helped give Nine an easy win, + 6 points clear of Seven. Seven was largely unaffected while 10, ABC and SBS lost share.

MAFS dominated the night’s viewing, however, Nine might be slightly disappointed the premiere didn’t achieve the ratings of the previous two seasons in linear viewing. Expect a large uptick in the viewing numbers when on-line is taken into account.

The result compares to the 2020 premiere of MAFS that had 1.155 million and was the highest rated premiere to date. Last night’s debut was also down on 2019 that had 1 million viewers.

Meanwhile the Grand Final of Holey Moley saw 491,000 tune in while The Amazing Race was number two reality with 508,000 watching, down from last Monday.

The return of the normal afternoon line up for Nine also saw a boost in news numbers for the network. 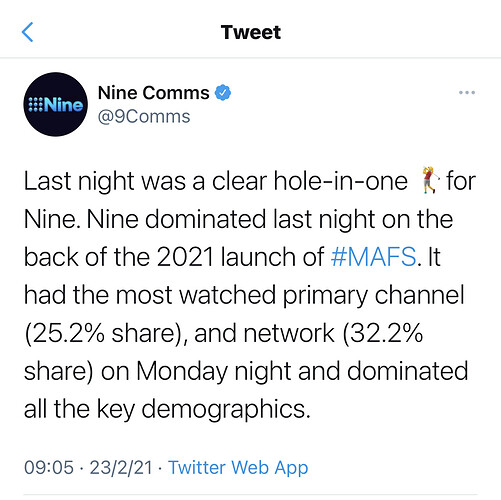 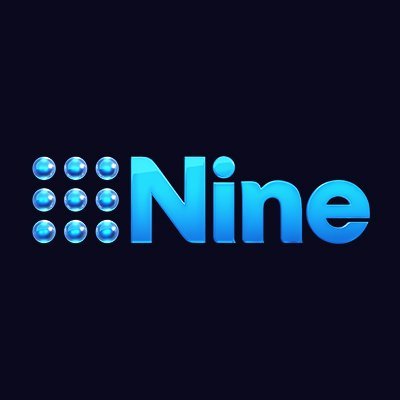 Last night was a clear hole-in-one 🏌️‍♀️for Nine. Nine dominated last night on the back of the 2021 launch of #MAFS. It had the most watched primary channel (25.2% share), and network (32.2% share) on Monday night and dominated all the key demographics.

MAFS still firing. How long can this show go on. Whilst it’s total trash, seems to be a connection to this show like no other has shown before.

I think the format will be see out this entire decade.

Seven won’t be happy with the ratings for Holey Moley grand final after a good start. The average audience per episode was 572,000. I still think it has potential for renewal but changes will need to be made (e.g. showing it just once per week).

Seven News and Nine News tied for the 6pm half in Melbourne but Nine News won over the hour. The exclusive interview with former AFL player and coach Mark Thompson helped ACA to a clear timeslot win in Melbourne as well.

I still think it has potential for renewal but changes will need to be made (e.g. showing it just one per week).

CEO said once a week Sunday from next year from the ‘learnings’ they have taken from this failed experiment, IF they went in for a second season.

MAFS still firing. How long can this show go on. Whilst it’s total trash, seems to be a connection to this show like no other has shown before.

I think the format will be see out this entire decade

the bubble will burst eventually. People will eventually tire of it or it will jump the shark somehow.

MAFS still firing. How long can this show go on.

Married at First Sight has been on Channel 9 since 2015.

seems to be a connection to this show like no other has shown before.

MKR, MasterChef and The Block enter the chat.

Married at First Sight – Launch was the No.1 program of the night in Sydney and Melbourne and claimed the primetime audience across in Brisbane, Adelaide and Perth.

A Current Affair claimed its 7pm timeslot across the 5 City and in Sydney, Melbourne and Brisbane.

Hot Seat won the game show battle across the East Coast and in Sydney.

Nine would be slightly bumped that it didn’t reach the 1 million mark, but overall News numbers is back for them after the disappointing numbers that were drawn against Seven from AO lead in, was 100K-200K viewers apart.

Nine won all markets except Perth that was won by Seven.

Many others things returned to normal with Nine’s Afternoon News beating Seven’s; Nine’s afternoon bulletin at 5pm doing well in Adelaide but still failing to find traction in Perth.

The local Adelaide morning bulletin on Seven saw its audience have from the previous week but still managed to beat Nine’s that was at a similar level to Studio 10 Extra.

Programs outside the top 5 in 25-54 included

That hasn’t happened in a while…

Poor result for Seven News in Brisbane, especially for a Monday. Looks like Nine’s vaccine promos are working better than Seven’s.

No accounting for taste.

seems to be a connection to this show like no other has shown before.

I’d argue there was a far stronger audience connection for the early years of Big Brother on Ten.

MAFS launch lower than the I’m a Celeb GMOOH launch - a small victory for humanity!

No real surprise that the 2021 launch of Married At First Sight was last night’s #1 program, however I probably would’ve expected over a million metro viewers. Still I’m sure Nine won’t be complaining, especially since it was the top show of the night in Sydney & Melbourne.

Seems like Sydney has instantly switched back to Nine News with an even bigger ratings lead than they had over Seven on the last pre-tennis Monday. I feel that aside from the Olympics weeks (if that event still goes ahead), it’s going to be a long year for the Martin Place newsroom.

I think the format will be see out this entire decade.

Gee I hope not.

Seven won’t be happy with the ratings for Holey Moley grand final after a good start. I still think it has potential for renewal but changes will need to be made (e.g. showing it just once per week).

Holey Moley will have to be cut back to once a week and significantly relaunched if Seven is to renew the show for another season, I think.