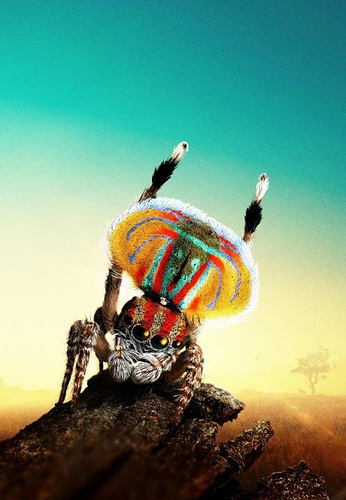 Across Australia, as the dawn rises the marsupials go to bed – except for the ones that don’t – because there are exceptions to every rule in this land of ancient wonders, of big skies and jewelled seas.

Narrated by Barry Humphries, Magical Land of Oz is a blue- chip, continent-wide natural history series ranging from the land’s highest snow peaks to the depths of the frigid and wild southern seas; from its last populations of wild numbats to its largest diorama of giant cuttlefish. It’s a land of diverse beauty, that delights and surprises. The series both entertains and deepens our understanding of how the natural world is made up of not just unique species, but distinct individuals, whose lives are far from predictable.

Using the latest camera technology, Magical Land of Oz reveals animal populations only recently discovered, and behaviours not associated with species we thought we knew well. We meet animal characters so enigmatic, most Australians are unaware they share not just their island continent – but their own suburban backyards. The series also explores the challenges these animals must navigate in a land of extremes and extreme human-induced change. To do this, we fill the screen with colour, dance, acrobatics, music, mating and murder – all performed by the animals which make Australia a truly magical land.

The stage is set for the story to begin. 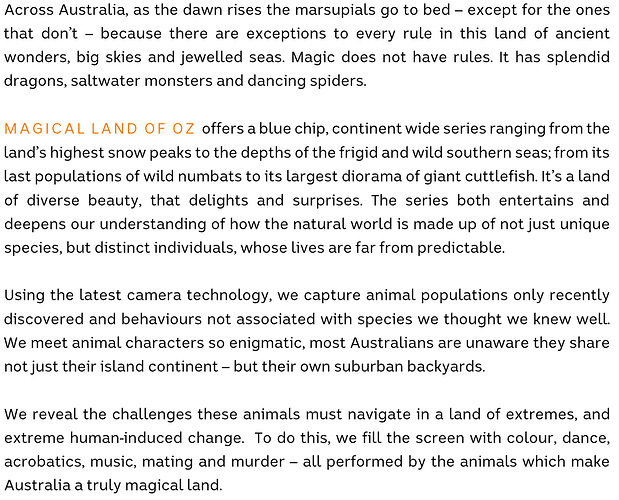 Most of Australia Lies underwater. Its marine wilderness is double that of its Landmass. Journeying in this episode through Australia’s three surrounding oceans and their islands, we discover an explosion of Life in the cold, spectacular southern sea, the sanctuary of the Pacific and the Indian Ocean with its awe-inspiring predators.

Australia is one of the most biodiverse of all landmasses – its landscapes spectacularly varied. The Australian ‘bush’ is a generic term but its landscape is anything but. In equal amounts it is lush and wet, arid and sharp, a perfumed expanse of dappled light. We move from the continent’s snow-covered peaks to its ancient rainforests and tropical savannahs, discovering how it is animals have learnt to thrive across the continent’s harsh and beautiful extremes.

Despite Australia’s relatively small population, the force of human induced change has been rapid and dramatic. And so, animal populations have reacted in rapid and dramatic ways. Researchers have found hectare for hectare, urban areas contain more threatened species than non-urban areas. It appears cities are in fact the hotspots for Australia’s unique fauna. And wild Lives intersect with human Lives in surprising ways. We meet Australia’s contemporary natural history success stories, and those being left behind as the continent rushes through the 21st century.

The show won Gold in Nature and Wildlife category in the 2020 New York Festivals TV and Film Awards.