Six-part comedy series about grief, ghosts and how hard it is to let go of those we love, especially when they’re taken too soon.

When Charlie’s best friend dies at just 38, he is rudderless and alone… until the wise-cracking ghost of his dead friend begins ‘haunting’ him

Ghosts, grief, loss and laughs will collide in the bold new six-part comedy series Limbo . Commissioned by ABC with major production investment from Screen Australia and production funding from Screen Queensland, Limbo weaves a compelling, honest and charmingly funny story about how hard it is to let go of those we love - especially when they’re taken too soon.

When Charlie’s best friend dies at just 38, Charlie suppresses his own pain in order to support his mate’s widow and young daughter. But he is soon forced to face his own demons when the ghost of his dead friend begins ‘haunting’ him. There are no levitating tables or flying books, but confronting the spectre of loss is the scariest thing Charlie’s ever done. The only comfort is that he’s facing it with his charming, witty and garrulous best mate by his side – albeit in apparition form.

Todd Abbott, Head of Comedy for the ABC, said, “From the moment I read the first scene, I knew this series was something very special. Finding genuine comedy in grief is no mean feat, and this talented team has delivered scripts with the perfect balance. We’re really excited to share these characters and this very relatable story with Australian audiences.”

Screen Australia’s Head of Content Grainne Brunsdon said, “Limbo is a smart and relatable comedy with a powerful message at its heart about friendship, mental health and grief. We’re pleased to support Heiress Films making their first foray into scripted content and working together with the excellent team at Bunya Productions this is set to be a high quality Australian series.”

Screen Queensland’s CEO Kylie Munnich said, “Screen Queensland has supported this project since its inception, via a major development initiative as well as funding Lucas Taylor’s residency at the Charlie’s Writers Lab in Los Angeles, where the script was further refined with Trent O’Donnell. We’re delighted to see this poignant and important story come to life, soon to commence filming in Queensland."

Producing team David Jowsey, Greer Simpkin and Jennifer Cummins said, “Bunya Productions and Heiress Films are delighted to be working with the talents of Lucas Taylor and director Trent O’Donnell to create a rich comedy about love and loss and the relationship of two young men whose friendship gets real once the real walls disappear.”

Limbo will film in Queensland later this year and air on ABC TV and ABC iview in 2023.

Production Credits: Limbo is a Bunya Productions and Heiress Films production for the ABC. Major production investment from Screen Australia in association with ABC. Financed with support from Screen Queensland, with Screen NSW.

Half the problem with ABC commissions is they pick these single-word names that don’t mean anything. Limbo? Troppo? Barons? Laid? Even Fisk was a great show but you wouldn’t know from the title alone. A poor title can be a major impediment to anyone taking notice of the product.

Surely they could use some imagination and pick a title based on a saying or turn of phrase. Stuck in Limbo. In Limbo.

Don’t worry. They have another upcoming show called The Messenger which from the synopsis is also a meaningless and confusing title.

Ummm The Messenger is adapted from the novel of the same name.

Yes but the point is that it’s such a generic title you don’t know what the series is about. 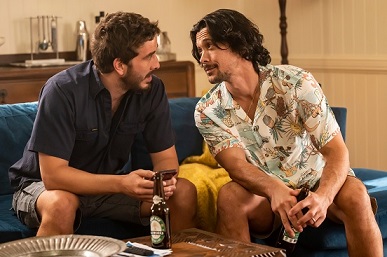 The ABC is delighted to announce celebrated Australian actors Ryan Corr and Bob Morley will star in the bold new six-part comedy series Limbo, which has commenced filming in Queensland.

Ryan Corr (Holding The Man, Wakefield, High Ground) returns to Australia after his role as Ser Harwin ‘Breakbones’ Strong in Game of Thrones: House of the Dragon, and Bob Morley (Love Me, Blinder, Neighbours) returns from LA, where he appeared in seven seasons of the sci-fi hit The 100.

Loss and laughs collide in Limbo, which explores the compelling and charmingly funny story of best friends Charlie (Ryan Corr) and Nate (Bob Morley) as they’re faced with how hard it is to let go of those we love - especially when they’re taken too soon. And when they come back to haunt you. Literally.

Todd Abbott, Head of Comedy for the ABC, said, “The fact that so many of this brilliant cast, who are kicking goals internationally, are coming home to make this series speaks volumes about what a special show it is going to be. It’ll warm your heart, break your heart, thump you in the guts and, most importantly, make you laugh the way only a ghost buddy comedy set in Brisbane can.”

The six-part comedy explores the compelling and charmingly funny story of best friends Charlie (Ryan Corr) and Nate (Bob Morley) as they’re faced with how hard it is to let go of those we love – especially when they’re taken too soon. And when they come back to haunt you. Literally.