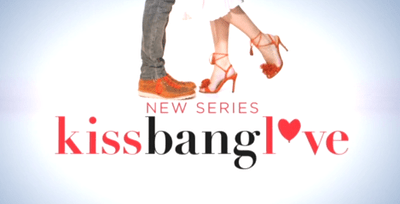 What we know so far:

Kiss your way to love in the provocative new dating format from the creators of Married at First Sight. Research shows that kissing is a powerful tool in our search for the right partner so in a radical new TV experiment, we put this to the test.

Ten Aussie singles will be matched with 15 potential partners. Most are strangers. Some are acquaintances. Others may be former lovers. They’ll skip the awkward dates and try to kiss their way to love before deciding who to take on a romantic holiday. Will a pash lead to passion? Is one smitten after a smooch? Can a kiss from a stranger end in love?

From the audition call

This new TV show is designed to help single girls and guys find their perfect partner - in a very unique way. Kissing is a powerful tool in our search for the right mate - but can it find love? This is your chance to find out. KISS BANG LOVE is a match making show where there are no awkward first dates - you’ll fast forward to the first kiss.

The promo shown last night looked good but the premise of the show looked really awful.

Singles looking for love are taking part in an exciting, extraordinary and provocative new TV experiment for Channel Seven.

There are no relationship experts to guide the singles on Kiss Bang Love. The Singles have only their feelings and intuition to rely on. Decisions are based on touch, feel, smell and even taste. In this controversial experiment, the Single’s five favourite kissers return without blindfolds, to chat and indulge in a second round of kissing.

Then the two most outstanding kissers are chosen for separate 24 hour dates with the Single. There are glamorous locations, romantic events and authentic and enticing activities. The stage is set for loving – whether it happens remains to be seen.

Kiss Bang Love is a totally unpredictable and life-changing TV experiment that comes to a stunning climax at the airport – with the plane ready to depart — when the Single chooses one of the dates to join them on a romantic holiday.

On their return Kiss Bang Love discovers if you can find love with a first kiss.

Each episode is a new adventure for a new Single kissing twelve new strangers.

This trailblazing, modern new TV dating series dares to court controversy by testing the theory that it’s better for true love to be found at first kiss - not by looks.

Kiss Bang Love is a format created by Snowman Productions Denmark - creators of Married At First Sight - and produced by Seven Productions.

Kiss Bang Love asks the question: Can you find love with a first kiss?

On their return Kiss Bang Love discovers if you can find love with a first kiss.

Well at least they know their format

The show got a big promo push at quarter time of the AFL match between Hawthorn and Sydney at the MCG. First the TV ad was shown on the big screen, then John Deeks went on to the field and introduced the show, then as a kiss cam appeared on the screen with camera aiming at the crowd, he urged the fans to kiss. A few couples kissed but others were too shy.
Here are two photos I took from the ground. 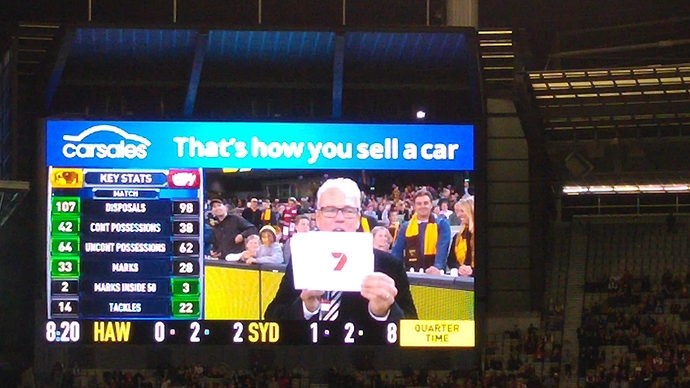 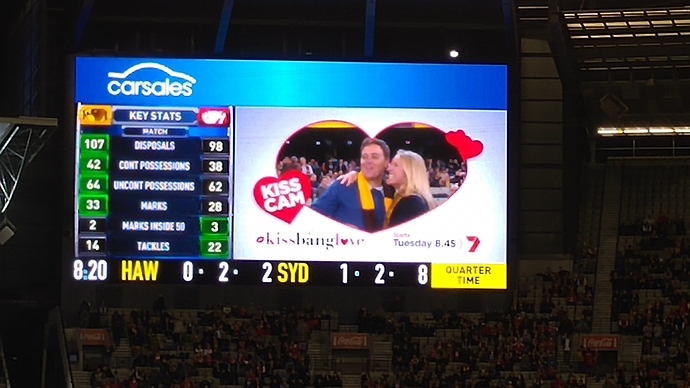 This is up there with one if the worst shows I’ve watched.

This was ridiculous. The girl ended up with someone she already knew before the show even began. So much for kissing “12 complete strangers”.

It was pretty obvious from the get go who she would choose. It really cheapened the whole concept for me in the end.

Why did producers allow her best friends to submit a suggestion for her to kiss?

Didn’t watch a second of this.

Worst part however was seeing their absolutely desperate, pathetic promo of old archive footage of kisses between football players on grounds over the last 30 years - before finally telling us we were watching a promo for their new show.

What one had to do with the other, I don’t know. But at least we heard about the AFL again. AFL. AFL AFL. It’s ridiculous. The main channel has just become a platform to advertise their multi-billion dollar investment.

Kiss Bang Love rated so poorly on Tuesday that it finished just ahead of long-running afternoon US soapie The Bold And The Beautiful.

Worth noting it even missed the top 20 in Seven-loving Perth where it did rate less than Bold.

I’ll Tell Seven to Pull KBL from the Schedule Immediately.

Tuesday’s Third Episode will Drop even Further after House Rules.

The final episode of this “exciting, extraordinary and provocative new TV experiment” has been pulled from Seven’s schedule. It was originally for next Tuesday but is no where to be seen.

The final episode of this “exciting, extraordinary and provocative new TV experiment” has been pulled from Seven’s schedule. It was originally for next Tuesday but is no where to be seen.

Kiss Bang Love has been a ratings flop and Channel 7 confirms the dating show won’t be back in 2017
AUSTRALIA has seen the last of Kiss Bang Love. Channel 7 has confirmed that the dating show won’t be returning for a second season.
http://www.dailytelegraph.com.au/entertainment/television/kiss-bang-love-has-been-a-ratings-flop-and-channel-7-confirms-the-dating-show-wont-be-back-in-2017/news-story/b4c9445399fb20d7445788f8e67cad47