There’s a lot of threads which exist purely because some people like to line up their shoes in a certain way on this forum. This is no different. I just ignore them.

There’s certainly a valid place for discussion on who is presenting bulletins when it is something significant, unusual or new in some way. I’ve never had a problem with that. Especially if it is something that has potential to lead to a discussion; there are so many good examples of this every week I don’t think I need to share any.

However, the way that a number of threads in the forum have more recently developed is worrying . Several seem to be now be treated as was described above as a database, even seen in the formatting of the posts. These almost never seem to result in discussion; because they look more like a news feed.

I would support their exclusion from the forum all together. However, is they must be included, perhaps in a separate special thread. Possibly also one that doesn’t allow likes to be made on the posts.

It would be interesting to hear from the members who do this on a regular basis and get an understanding of what purpose they think it provides. It could help those like me understand what purpose it serves and see it from the other side of the fence.

However, the way that a number of threads in the forum have more recently developed is worrying . Several seem to be now be treated as was described above as a database, even seen in the formatting of the posts. These almost never seem to result in discussion; because they look more like a news feed.

Yes, this is exactly what I was referring to before.

I mean, this forum does serve as a record. Look at ratings, watermarks, long distance reception, etc. A lot of that gets documented with little discussion attached.

The difference here is these are people who, despite being on TV regularly, aren’t celebrities and aren’t in it for just the fame and attention. They are professionals. Quite often they are talked about as if their whereabouts outside the sphere of television presenting are noteworthy. Yes, they are public figures and mentors to an extent. I just feel it’s unhealthy to know that much about a newscaster.

I’d feel dirty saying “Noel is on holidays with his wife. They just had their 3rd baby in April.” Like, I kind of respect that we wouldn’t need to discuss that, let alone have that on the record. But that’s just me.

No problem with a post about somebody new or different who is hosting but not particularly interested in seeing a daily update on whonis hosting or a mention of the same usual fill-in hosts.

A suggestion - not fully formed at this stage.

We currently have forum topics that show the current regular presenters for each network. Any member can edit this list to help keep it current.

Could we have a similar one post entry for each news program at the network. If possible listed under the entry I showed above. And have that entry editable by all members. Then anyone who wishes can make a contribution with the date and whatever variation they think is notable.

So for example using actual posts in the current ABC News Presenter thread used from the past couple of weeks.

Sunday 17 July- Tamara Oudyn is back presenting in Victoria tonight.

This forum is like an old friend that I struggle to maintain a connection with because it is constantly evolving, especially in the last couple of years.

It’s an observation, not a criticism.

After reading all of the above, I’m more confused of what I’m supposed/not supposed to post or where to post them or how I should post them.

I do find that a lot of views on what you should/shouldn’t do can be very subjective at times.

There are just so many topics/sub-topics/threads/sub-threads, etc. And when something has grown in size, that means more rules, complexities, issues and conflicts.

I miss the good old days.

Leave it as is.

And if a presenter - say Gavin Morris - posts publically on Insta etc what they’re doing, that’s in the public domain and is fair game for it to be reported on here and elsewhere.

I’d be happy to see it go - but I’m not going to go out of my way to make that happen.

posts publically on Insta etc what they’re doing, that’s in the public domain and is fair game for it to be reported on here and elsewhere.

I’ve never been comfortable with this argument

That is part of the problem, if people want privacy, they really need to stop publicly posting that kind of thing. Leave their private lives private.

I agree, once you put something in the public domain, you’ve lost it. If you don’t want it out there, don’t post it.

I think part of the problem is the respective PR departments probably like (push?) this sort of thing to generate connections with viewers, but it really is a slippery slope, particularly when you don’t know everyone that is on the other side.

I think there can be some discretion about what’s relevant and interesting.

“Person B filling in for Person A” where Person B always fills in. Not interesting.

“Person C filling in for Person A” where Person C is not a usual fill in and it could be a career progression for them. That could be interesting.

“Person A on leave to go on holiday with the family.” Not interesting or relevant.

“Person A not on air tonight because they’re travelling to Somewhere to Host something” where this is a professional commitment. Possibly interesting and relevant depending on size of the gig. If it’s to host a trivia night and the local fundraiser, then not so much, but if it’s to participate in the latest reality show, then maybe.

Can someone open the Ch17 thread? I want to needlessly speculate that it will be Ten’s foray into establishing a $3bn 24 news channel.

And if a presenter - say Gavin Morris - posts publically on Insta etc what they’re doing, that’s in the public domain and is fair game for it to be reported on here and elsewhere.

Ok but why do we need to know why they aren’t on air?
If they are taking a day of leave, it’s no different to you taking a day at work. Why broadcast what the person is doing when it adds nothing to the conversation other than “I’m outraged Nat isn’t at work today to go to a equestrian competition”? It’s fodder.

I have no issues with the odd update on presenting changes, but I think just like threads full of daily caps of sunrise when there isn’t anything different to the day or week before in them, pointless.

Let’s keep the callsign discussion in the right thread, folks

Ok but why do we need to know why they aren’t on air?

Totally get what you’re saying but let’s be honest - the site is called Media SPY.

Would think the “spy” aspect of the site name wouldn’t work well if we didn’t discuss why presenters aren’t on air and what they’re up to.

It would be a fairly boring place.

Me? I’m sitting here in studio 2 at Triple M Newcastle running the footy broadcast, having tipped the Raiders and getting shitty with the Knights because they’re leading.

I think you need to chill out.

I just want to remind people that not everyone is an English native speaker around here and people have different backgrounds and upbringing. Hence sometimes your posts may be interpreted as bitchy and sarcastic. That’s what I’ve experienced with some of your posts over the years. So it’s best to stay out of each other’s path from now on.

And the same with that particular member who has emphatically shown their support to you by ‘liking’ all your subsequent responses to my original post (You know who you are). Again, it’s perceived as a bitchy and unpleasant experience over the years. I am not going speculate about other people’s intentions because it’s not like we are mates in real life.

I’ll stand by my comment in an earlier post on this thread: this forum is like an old friend that I struggle to stay connected with.

I notice the reply button has disappeared from the COVID thread. Is it just me? 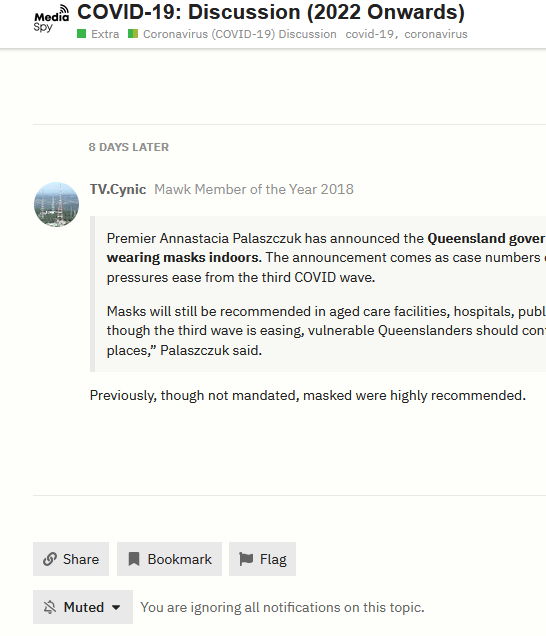 Same here, there is no reply button for me either.

Also gone for me