Another shopping channel? Now they’re just taking the piss. Honestly, we have too much, there’s Extra, TVSN, gecko and other channels such as 7 broadcast home shopping in the early hours of the morning. Wasn’t channel 17 met to be part of the 10 branding? (Like 10 bold, peach, etc) why did they remove a shopping channel to then replace it with another shopping channel? It’s stupid. Would’ve been nice to have a music channel or something else that doesn’t already exist on free-to-air television

Haha
Literally no one. Stupid speculation only found on MediaSpy

Pretty sure I also saw it listed as one of the channels associated with 10 network back when the channel was named TBA. If not, I’m sorry for spreading fake information.

If you looked at network ten or paramount on wikipedia and look at the channels listed TBA channel 17 was listed. If you look now it’s removed.

Honestly, we have too much, there’s Extra, TVSN, gecko and other channels such as 7 broadcast home shopping in the early hours of the morning.

Be grateful you don’t live in Regional Australia. We have ishoptv, TVSN, GOLD and SBN. Also on Seven Regional they broadcast infomercials sometimes on EVERY channel. Like this: 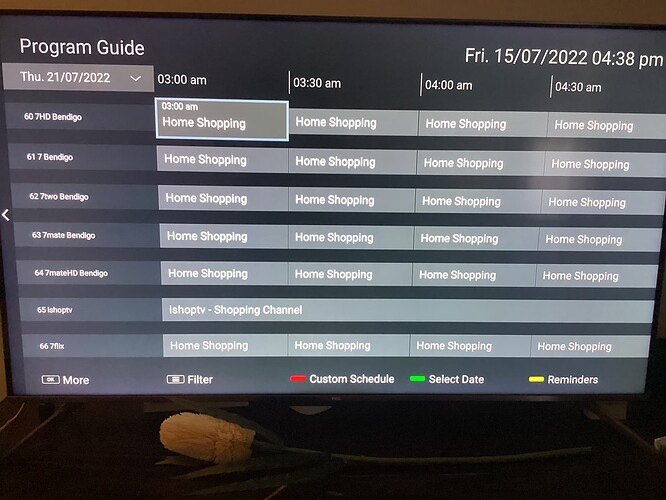 There’s your problem, right there.

Don’t always believe what’s written on Wikipedia. Unless it has a link to a resource confirming it, take it with a grain of salt.

Yeah, and I was meant to be the next king

Once upon a time I thought wikipedia was Legit but I learn quickly anyone can put what ever they want on it.
I still use it but I don’t believe everything I read on it!

according to wikipedia it was meant to be 10 Sport

By an anonymous user from Brisbane, without any sourcing

Someone tried to post that here and ended up on a posting holiday when they persisted.

Wikipedia is good and for some topics is a very useful and valuable resource. Unfortunately when it comes to anything related to Australian television there are people on there who find that the line between reality and their own fantasy scenarios to be somewhat blurred, resulting in misinformation being posted and confusion as a result.

according to wikipedia it was meant to be 10 Sport

Ok, first time switching this on just to take a look and state away it pops up tvsn shopping .com.au? So what the hell? This channel is basically just tvsn but runs as "gecko tv?