And Nine tried an afternoon edition of Entertainment Tonight and it flopped.

It is now 2019. Very differnt TV ladnscape. I just think something news but is not the same old thing and appeals to younger demos would better bridge the gap between the News and The Project.

Wasn’t it on Tuesdays at 8pm? Unless they tried it at 6pm as well.

E! News was definitely at 6pm at one point. 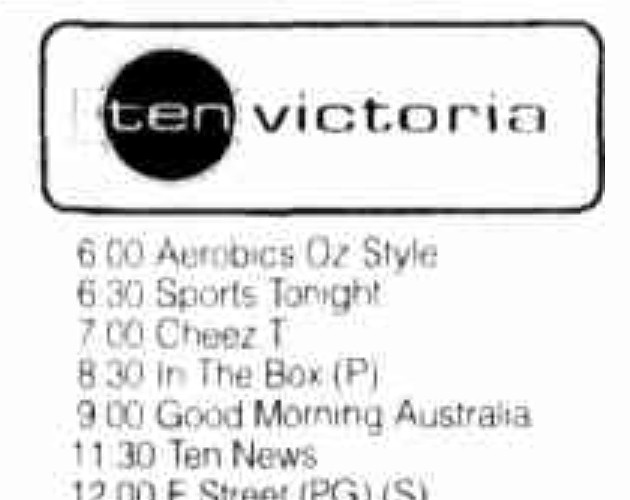 It premiered Tuesday nights at 8pm with Donna Gubbay, a former Sale Of The Century gift shop model and Channel V VJ, and Nick Bennett but was moved within a couple of months to 8pm Wednesdays. There were rumours that Gubbay would be replaced by Charlotte Dawson during the first months but Dawson ended up joining the show as fashion reporter. The show underwent an overhaul mid year. Nick Bennett didn’t survive the revamp.

Look at that TV schedule. That is such a blast from the past and better than what we have today.

I think it’s safe to say extended news at 6pm is here to stay.

Looks like the fate of the show has been sealed according to Herald Sun’s Colin Vickery:

“It has been very challenging … we haven’t seen the (ratings) growth we want to see,” (10’s chief program officer Beverley) McGarvey said.

“We feel like there is a real appetite for news at the moment. We did it (extended bulletin) as a trial and it is going really well.

“If this is something we can make work for our audience then of course we would consider it for the long term.

That had been the policy in the past, it’s a term and condition in the contract. But apparently some game shows recently have gone against that and have paid winners even when episodes didn’t screen.

I feel that this is the best suited timeslot for a gameshow and Celeb Name Game (or a gameshow of any sort) might actually do OK here. An extended 10 News First, which has seen a lift in network share in the 6pm slot, will continued to be ‘trialled’…

10 Head of Programming Daniel Monaghan: “ Celebrity Name Game is living on BOLD at the moment. I think we’re very happy with the way News is performing. The amount of work from the news team for an extra half hour has been extraordinary.

“We don’t have any plans to go back into the studio for Celebrity Name Game .”

In other words, the show has been axed.

Good idea though. Grant Denyer and the stupid antics he was up to (dancing, that namaste crap and the thunder and lightning rubbish) was unbearable and the format is repetitive. Rove demonstrated how much better he was at hosting but the show itself wasn’t fantastic so it’s best to get rid of it sooner than later.

Does it means there are no new episodes left? I notice 10Bold is still showing repeats at 6pm even though official ratings have begun.