While the post certainly says single, the page has responded to multiple comments questioning if you need to be single, saying people in relationships may apply too. Mixed messages?

Well that’s the show finished for sure. Cheap stunts whilst keeping the cheap and nasty production quality alive.

How much would it cost them to have it live? How about ditching some of the E-grade overseas dramas they have and invest it into Big Brother and local dramas?

Enough with the gimmicks, stunts and survivor-type challenges for Big Brother! And bring back some of the live elements of the show.

Well that’s the show finished for sure. Cheap stunts whilst keeping the cheap and nasty production quality alive.

That’s the show done? I thought the 300k for a show that brought back some of its biggest names was the show done. There must be something 7 are seeing that we are not.

How about ditching some of the E-grade overseas dramas they have and invest it into Big Brother and local dramas?

Unfortunately I don’t think ditching E grade dramas will pay for what you want. I wouldn’t be surprised if these are coming to 7 for next to nothing prices or are part of a deal.

Exactly, wish they would go back to the live back to basics format that the UK is doing next year. But that will never happen as long as the show stays with 7.

Unfortunately I don’t think ditching E grade dramas will pay for what you want.

Then the people running Seven are idiots. They keep wanting to win but they fall flat many nights thanks to those stupid UK dramas air after their reality. They don’t even try after 8.30pm. No local dramas, no local factuals. They’re only interested in stupid shows like Dogs behaving Badly.

How much would it cost them to have it live? How about ditching some of the E-grade overseas dramas they have and invest it into Big Brother and local dramas?

Doubt it’s entirely a cost thing but more so Seven wanting to (rightly or wrongly) ‘shape’ the story arcs/themes of the season as they see fit - something pre-recording the entire season clearly (as seen over the past few years) allows them to do.

Australian TV has sadly become not only very risk-averse but it’s forgotten how to do ‘big event’ TV - something BB’s live evictions certainly were during its original incarnation. Seven’s incarnation of BB is testament to both of those things. 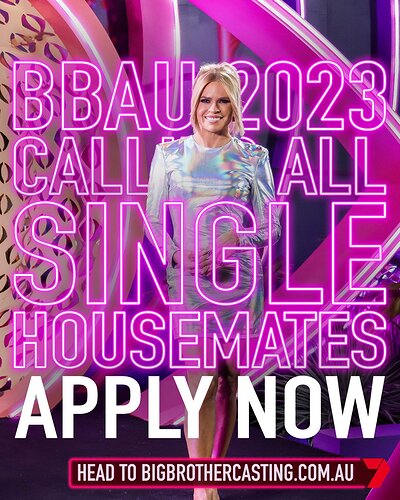 If it’s going to be all relationship crap then I won’t be watching.

They are probably going for a love island type thing in a house but im sick of seeing all the young single ones that has options, they need to put in the MAFS types that are single for a reason cause they’re batshit crazy

How low can you go…

How low can you go…

It’s 7, they haven’t even touched the bottom yet.

The turkey slap happened in 2006. Vesna was indeed on the 2005 season and she said she is keen to go on BB again. She was supposed to be on this year but was replaced with Layla.

According to Sunday Herald Sun’s Fiona Byrne, frustrated fans have launched an online petition demanding that producers Endemol Shine and Seven stop meddling with and ruining the format of BB. The petition calls for: live streaming into the house; public voting in eviction of housemates; live evictions; ensuring the challenges are fair and give every housemate the same fair chance of winning; banning housemates from talking about nominations / voting.

That’s one petition I would sign, but I have a feeling it’s already too late.

It’s 7, they haven’t even touched the bottom yet.

With Seven, there is no bottom. They just go further and further down the barrel.

The only reason a lot of long term Big Brother fans watched this year’s season was to see the “OG” housemates. This “sexy singles” pre-recorded season is going to tank hard. Maybe they have already planned to air it in a 9pm timeslot.