Upon further discovery, 5CS-AU Spencer Gulf & 5CC Port Lincoln are now carrying the same log as its QLD/NSW “Classic Hits” stations (on a 30 min delay, due to time zone difference).

Meanwhile, 5RM uses the VIC/NE Tas AC log, whilst 5MU still uses its own log. Magic 93.1 in Riverland uses the VIC/TAS CHR log, whilst the other Magic FM stations in Spencer Gulf & Port Lincoln, as well as Power FM in Murray Bridge, still have their own logs.

Its a shame, but I hope 2GN does not change too much. Its the way of the radio world these days. A Queensland radio station is making a bold move.

This would also apply to Hitz Bundaberg & Star in Cairns/Townsville/Mackay, since Hot 91’s music log extends to those stations.

Didn’t they do this last year too?

No, it was with Perth-based bands, as the Sunshine Coast netball team was competing with a Perth team for the grand final. 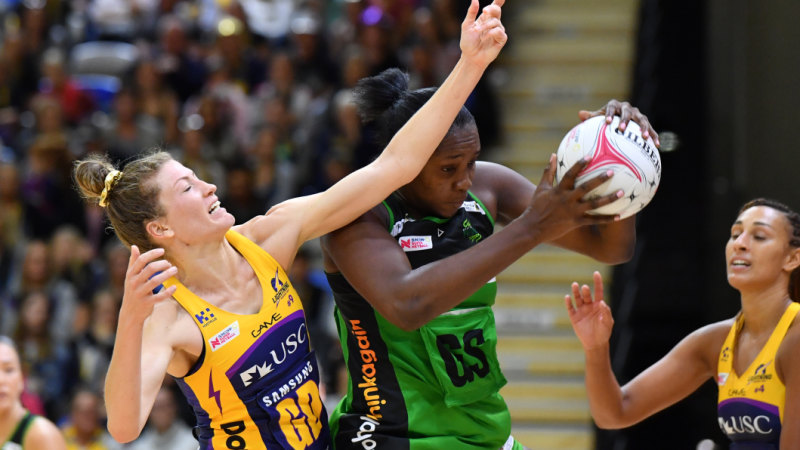 Hot91 Sunshine Coast FM made the extraordinary decision due to their position as official radio sponsor of the Lightning, who will take on the Fever at Perth Arena on Sunday.

I drove to Ballarat today, noticed Power FM is now branding as Power 1031

Oddly enough they’re not doing that today - both voice breaks and imaging referring to either Power FM or 103.1 Power FM

Just looking at the Just Played pages for the following stations, and it appears that Wave FM in Wollongong are now sharing the same log with Power FM in Nowra, Bega & Muswellbrook.

At least that’s the case at 4-6pm on Sundays over the past few weeks according to Lava for Wave FM & Power FM Hunter. Maybe they’re trialling on getting the Wave FM log to spread to the aforementioned Power FM’s in NSW?

Remember when Wave FM & Power FM were targeting a different audience from one another? It seems so long ago now.

Grants are slowly beginning to transform into SCA 2.0.

On weekdays from 9am, Wave FM & Hot Tomato are sharing the same log for the first 5 songs of that hour, before going their separate ways for the rest of the day.

That is crazy Power fm and Wave sharing the same playlist considering the proximity of Nowra and Wollongong, and the extent of Power fm overspill into Wollongong from Knights Hill.
It would be the same as the edge 96.1 taking the kiis 106.5 log.

Not too crazy considering there are a few SCA stations that overlap and have the same playlist.

Would this make Power fm skew older??
I guess there is still plenty of room to move between their format, and that of their sister station 2ST.

I wouldn’t think so, Grants have obviously decided that Wave and Power do not compete, despite both having signals strong enough to be in full stereo on car radios pretty much anywhere south of the Wollongong CBD (which is where Power’s signal starts to drop off when heading north).

Wave and Power fm are running off different logs this morning.

On weekdays from 9am, Wave FM & Hot Tomato are sharing the same log for the first 5 songs of that hour, before going their separate ways for the rest of the day.

Whilst the station currently is managed as a standalone business unit within the Camerons (ie. Graham Miles reports to their family board similarly as he did to Hans and Anna; a smart idea if they wish to retain the value of purchasing the station as a #1 performer), Simon Dawson is one of the employees who has the most contact with other stations, involved in scheduling many logs.

In the same way that you wouldn’t confine David Crane’s engineering expertise to the Gold Coast (having already collaborated closely with the Camerons and EON regarding digital radio/the impasse we’ve discussed here many times), same for the music director.

Perhaps if Hot Tomato hadn’t been looking to sell, another revenue stream they could’ve explored was outsourcing services such as music scheduling, engineering and research. The nature of the radio sector in Australia limits outsourcing as it is more often than not perceived as another cost unfortunately.

Wave and Power fm are running off different logs this morn

So they’ve read our observations and are curious if we notice?

We’re now at this time of the week where Wave FM & Power FM’s NSW stations are sharing their playlists.

Here there are, taken from their station’s websites at around 4:40pm AEST. The one Power FM station I use is the 94.9 one, as both it & Wave can be heard into each other’s licence areas from the same tower. 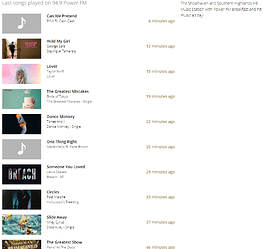 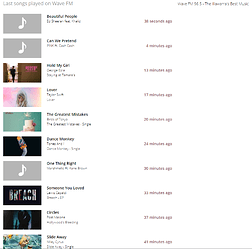 I was driving back to Sydney from Bowral and had Power fm on, they were running a top 20 countdown. I wonder if Wave fm also took this countdown at the same time which was causing the duplication of playlists across both stations.
Tomorrow they will be back to seperate logs again.

BTW I was also listening to Eagle fm where receivable and their playlist beat all of the receivable CHR / Hot AC stations.

I was driving back to Sydney from Bowral and had Power fm on, they were running a top 20 countdown. I wonder if Wave fm also took this countdown at the same time which was causing the duplication of playlists across both stations.

That would explain it.

This illustrates the point that Wave FM is more closely aligned with Power FM than with 2ST/EC/NM, music wise. With that in mind, I’m a bit surprised they haven’t taken “The Random 30 Countdown”, which airs at 7-10pm weeknights on Grant’s & ACE’s CHR/Hot AC stations.

I was driving back to Sydney from Bowral and had Power fm on, they were running a top 20 countdown. I wonder if Wave fm also took this countdown at the same time which was causing the duplication of playlists across both stations.

Hot Tomato have a top 20 based on supposedly the Gold Coast’s top 20 of their audience that week. Perhaps they’re doing similar however it’s the same across all NSW markets? Perhaps it’s the same schedule?