As part of the Melbourne International Comedy Festival, Tom Gleeson will host Australia’s comedy night of nights The Gala in support of Oxfam.

The Gala is the most anticipated night on the comedy calendar with wall-to-wall laughs from a huge lineup of local and international stars, including, Nazeem Hussain, Tommy Little, Paul Foot, DeAnne Smith, Becky Lucas and Rhys Nicholson.

Host Tom Gleeson is one of the sharpest minds in Australian comedy. His stand-up shows are relentlessly hilarious and masterful. Despite his ruthless grillings, he’s still got a lot of love to give!
Tom says “I can’t wait to show ABC viewers the funniest comedians from Australia and the world. It has been a dream of mine to host the Gala ever since I was asked to last week.”

This one-off spectacular is not just a great night out, it’s a chance to do some good. After all, laughter is the best medicine.

Oxfam’s ongoing partnership with the Festival has made a difference to the lives of thousands of people, tackling poverty head-on by providing clean water, decent toilets and practical, life-changing solutions for people in need.

The Gala will be held at Palais Theatre at St Kilda in Melbourne next Wednesday week (March 20) at 7.30pm and is already sold out.

Led by BAFTA and Golden Globe award-winning actress Brenda Blethyn as the unorthodox but brilliant DCI Vera Stanhope, the crime drama returns for an eighth series. Based on the bestselling Inspector Stanhope novels by Ann Cleeves, Vera and her team are drawn into four more compelling cases; the body of a police officer discovered in an abattoir incinerator, a mysterious car crash, a suburban back-garden murder and the circumstances that led to the death of a teenage boy. Set around Newcastle and the stunning Northumberland countryside Vera features complex and intriguing cases, atmospherically-shot landscapes and captivating performances.

Fast Tracked from the US…Killing Eve season two premieres next month on ABC.

The wait is nearly over. ABC is thrilled to announce that the new season of Killing Eve will be fast-tracked from the US, with episode one launching Monday 8th April on ABC iview.

Undoubtably one of the most talked about shows of 2018, Killing Eve was embraced by audiences around the world and now, finally, Jodie Comer and Golden Globe award-winner Sandra Oh reprise their roles as psychotic assassin Villanelle (Jodie Comer) and MI5 intelligence agent Eve Polastri (Sandra Oh), reigniting their deadly game of cat and mouse.

With new episode dropping every Monday on iview from 8th April, and the series broadcast weekly on ABC from Friday 19th April, the new season of Killing Eve picks up where series one ended…literally 30 seconds later to be precise!

Audiences will discover the fate of Villanelle as she stumbles through Paris nursing the stab wound inflicted by Eve. While Eve heads back to the UK to face her husband and potentially the wrath of MI6’s Carolyn Martens (Fiona Shaw). But just whose side is Carolyn on? and can Eve trust her?

Killing Eve is written by Phoebe Waller-Bridge ( Fleabag ) and is based on the four-part novella series Codename Villanelle, written by Luke Jennings.

ABC will air the Al Jazeera documentary How to Sell A Massacre tonight and Thursday at 8pm.

That means Escape From The City will not air this Thursday. It will return the following Thursday at 8:30pm (due to the Budget’s Opposition Right of Reply) before returning to its normal timeslot of 8pm on Thursday 11th April.

One Nation and the NRA: An explosive investigation

The explosive new documentary How to Sell A Massacre reveals Pauline Hanson’s One Nation party planned to lobby the National Rifle Association of America (NRA) for up to $US20 million ($A28 million) in funding to roll back Australia’s gun control laws.

The two-part undercover investigation by Al Jazeera, acquired for broadcast by the ABC, shows One Nation representatives discussed changing Australian laws banning automatic and semi-automatic weapons with members of the powerful US gun lobby and sought funding to help the party “own” Australia’s Federal Parliament.

The meetings by One Nation’s Queensland leader Steve Dickson and One Nation Chief of Staff James Ashby with officials from the NRA and other pro-gun groups in the US were covertly recorded by Al Jazeera’s Investigative Unit.

During a visit to Washington, DC, in September 2018, Mr Dickson told NRA members: “If we don’t change things, people are going to be looking at Australia and go ‘Well, it’s OK for them to go down the path of not having guns, it’s OK for them to go down that politically-correct path.’ And it’s like a poison – it will poison us all unless we stop it.”

Mr Ashby is recorded saying that securing $US20 million in donations to One Nation from pro-gun groups in the US would give the party greater parliamentary power in Australia: “If you had 20 [$US20 million], you would own the Lower House and the Upper House.”

One Nation and the NRA declined to respond to Al Jazeera about the findings in its documentary.

According to TV Tonight, this week’s episode of Foreign Correspondent will be shown in two weeks’ time due to the Federal Budget coverage next Tuesday.

How To Sell A Massacre: Part Two 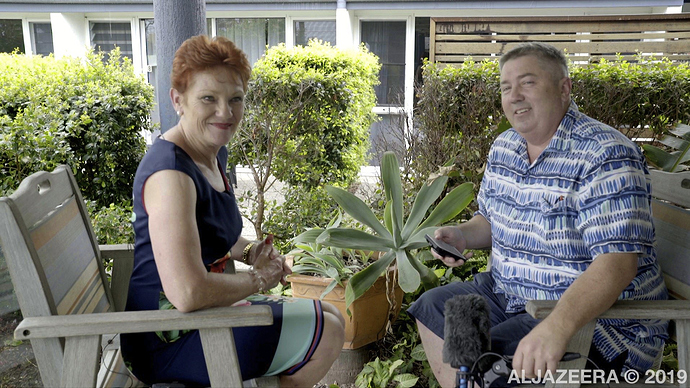 Pauline Hanson’s One Nation party workshopped plans with the National Rifle Association of America (NRA) to target women and “vulnerable people” in its pitch to undermine Australia’s gun control laws.

The second instalment of Al Jazeera documentary How To Sell A Massacre shows One Nation Chief of Staff James Ashby discussing how to sell a pro-gun message to Australians.

“It’s like Vegemite. You don’t put a f***ing bundle of the s*** on your toast. A light smear at first, get them used to the flavour,” he said. “Part of it will be let’s start looking at women’s shooting range programs, self-defence programs, whatever those things might be. Start re-empowering women or vulnerable people.”

It follows revelations in part one of the undercover investigation that One Nation planned to lobby the NRA and other pro-gun groups for millions of dollars to help it win the balance of power in parliament and roll back Australia’s gun control laws. There is no evidence to suggest it received any such donations.

Tonight’s footage also reveals that One Nation’s Queensland leader Steve Dickson likened winning the balance of power in parliament to holding a gun to the government’s head.

“The thing you need to understand about the balance of power is the headlock and the 9mm [handgun] to the back of the head, that’s where it sits,” Mr Dickson said. “Once you say ‘We want something’, we will get it. Without it, they don’t get any legislation through.”

Tonight’s program shows NRA officials advising One Nation how to undermine Australia’s National Firearms Agreement, including co-opting journalists to write pro-gun stories and targeting sections of the population with messages “that will get people outraged” about gun controls.

Responding to part one of How To Sell A Massacre, One Nation said its members “have always complied with the law” and it had referred the matter to ASIO and Australian Federal Police. 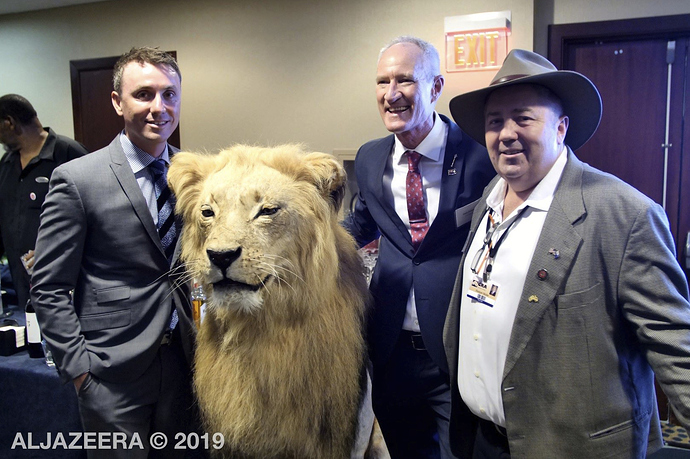 “It’s like Vegemite. You don’t put a f***ing bundle of the s*** on your toast. A light smear at first, get them used to the flavour,”

Ashby doesn’t know how Vegemite is spread on toast and sandwiches. It is always only a smear. Clueless in every area of his life.

No change to main channel broadcast.

“London Kills” is coming home after the BBC picked up the series, which is an original for the U.S. streamer Acorn TV. Much like BBC America’s “Killing Eve,” the series launched outside the U.K. an…

ABC has also bought documentary Heal Me in the Name of Jesus from UK distributor Orange Smarty.

Broadcasters in the UK and Australia have acquired shows from Acorn Media International, the global division of RLJ Entertainment.

TV Tonight based the article on the Variety report. Did David mix it up?

The Recording Studio gives Australians a once-in-a-lifetime opportunity to record in a world class studio with industry professionals. They must overcome their fears and realise their dreams so they can give the gift of a song that tells their story to someone special.

On The Recording Studio, everyday Australians are offered the chance of a lifetime, to help them professionally record the one song that means more to them than any other. It’s a place where stories can be told and captured forever.

Across 10 episodes the audience intimately get to know each person and the reason behind their recording. This behind the scenes look at what it takes to record a song is at times humorous, at times heartbreaking, but always moving, with the talent of these normal Aussies awe inspiring.

The Recording Studio will showcase many musical genres, from opera to rap, and country to contemporary music. Featuring original compositions and timeless classics, these lucky Australians will not only record their keepsake, they will also take a sneak peek behind the veil of the music industry.

The Recording Studio will be filmed at the iconic ABC precinct in the heart of Sydney which is being opened to the public for the very first time. The series takes a step inside Studio 227 – home of Triple J’s Like A Version and Live at The Wireless - where world class acts like the Foo Fighters, Paul Kelly, The Strokes, Silverchair and Missy Higgins have walked the halls, played and recorded.

Each contributor is mentored by a team of the music industry’s most acclaimed and talented producers. All experts in their genres, with a bucket load of Australian and International hits under their belts, the producers use their skilful hands to bring out the power and the story of each recording. Working with acclaimed recording engineer Anna Laverty, who’s worked with everyone from Florence and The Machine to Nick Cave, and respected Music Director and accomplished pianist, Scott Aplin, the team bring the recordings to life with the technical know-how only usually afforded to professionals. With such unique industry talents on hand to offer advice and industry know-how, each recording is a special and powerful lasting memory in song.

People of all ages and from all walks of life reveal their songs, their talents and most importantly, their stories. From the hardship of life in the Australian bush to celebrating the preservation of Indigenous language. We hear songs to walk down the aisle to, songs celebrating family and cultural diversity. Each song and story is unique and is performed as a gift to someone very special.

Voiced by music industry heavyweight Megan Washington, The Recording Studio celebrates the power of music to heal… inspire… and to transform! 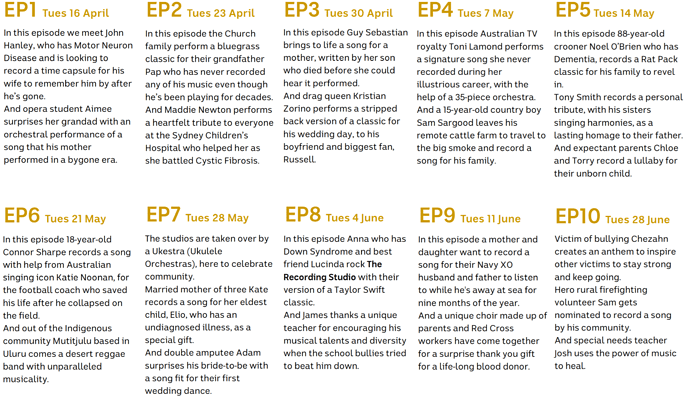