The ABC won many of this year’s major AACTA Awards for outstanding Australian television content, including Best Factual Entertainment Program for ABC original format You Can’t Ask That , Best Documentary for The Australian Dream , Best Factual Program for Old People’s Home for 4 Year Olds and Best Children’s Program for Bluey .

ABC comedy The Letdown won two of the biggest gongs at the 2019 AACTA Awards ceremony on Wednesday night, for Best Comedy Program and Best Performance in a Television Comedy for Alison Bell.

Michael Carrington, ABC Director of Entertainment & Specialist, said: “ Total Control has proven that people want to see Indigenous-led talent, craft and creativity in prime time, showcasing the depth and diversity of Australian stories and landscapes, from the Top End to the political centre in Canberra.

“Congratulations to all the AACTA Award-winning ABC programs and partners. Making audiences laugh, cry and think about the world around them is what we do, bringing the best of Australia to Australians every day.”

THE ABC OF AACTA AWARDS

Best Performance in a Television Comedy: Alison Bell ( The Letdown )

I don’t think AACTA will be happy with the declining ratings. I am not sure when Seven’s contract with AACTA expires, but will it be time to move the awards to another network? Also AACTA will have to reconsider the start time of awards ceremony to allow it to be broadcast live either on FTA or pay TV. Yesterday’s ceremony began at around 5.30pm AEDT.

Also ridiculous that the entire list of winners is made available at the start of the telecast.

That’s the fault of the academy. The winners list is meant to be embargoed so it can be published in the first edition of today’s papers.

I don’t think AACTA will be happy with the declining ratings. I am not sure when Seven’s contract with AACTA expires, but will it be time to move the awards to another network?

No one should know except whoever has counted the votes.

The awards have very little meaning to anyone outside the industry and need other huge overall, including a new name.

Putting aside the terrible production of the show itself, the Australian film industry is so tiny, there are barely enough films to go around the award categories. There just isn’t enough competition. Each year it seems that one or two walk away with the majority of the awards.

Because they are seen as the industry’s best awards and there’s the touch of Hollywood glamour to it, the Australian movie (and TV) industry doesn’t have the same resonance

There were over 30 films in contention for Best Film this year. But sadly, many of them were not shown at the cinemas for that long, and given next to no promotion.

And for the coverage to cut out some tv awards from telecast is a joke. Best Drama was not shown. Perhaps cause none were from Commercial Television?

Foxtel has congratulated its 2019 AACTA winners after a haul of 15 Awards were received at this week’s ceremonies, held in Sydney. The wins for the company were spread across Drama, Lifestyle and Sports.

“This huge line-up of wins for Foxtel is a testament to the hard work and dedication of everyone involved both on and off screen,” said Brian Walsh, Foxtel’s Executive Director of Television.

“As a proud Australian company, Foxtel is committed to showcasing local content and to supporting our gifted storytellers with a diverse and rich slate of programming across a number of genres. We are honoured to be recognised by the Academy and the voters,” he said.

Scott Ryan , the creator, writer and star of hit series Mr Inbetween took out the AACTA for Best Lead Actor in a Television Drama. This follows on from his 2019 TV Week Logie Award for Most Outstanding Actor.

Foxtel also had a major win in the lifestyle category with fan favourite series Love It or List It Australia securing the nod for Best Lifestyle Programme. The realty/renovation series hosted by Andrew Winter and Neale Whitaker has just concluded its third season.

Andrew Winter also won the AACTA Subscription Television Award for Best Male Presenter for his work on Love It or List It Australia and Selling Houses Australia on Foxtel’s LifeStyle Channel.

Fox Sports secured the AACTA Award for Best Sports Coverage for its Test Cricket Live of Fox. With cricket season well underway, the Award-winning team is back for a huge summer of cricket on Fox Cricket.

Foxtel has also announced an extension of its major sponsorship of AACTA until 2022.

Brian Walsh said, “As a proud partner of AACTA we are grateful for the opportunity to honour Australian content during the award season and all year long. I am delighted Foxtel is extending our partnership, with a new multi-year agreement to continue as the major sponsor of AACTA”

An extended edition of Wednesday’s ceremony, including categories not aired on Seven, will be shown on Foxtel Arts tonight at 7.30pm AEDT. If you want to see more of Wednesday’s industry ceremony head to Foxtel Arts.

wish an extended edition was shown on Seven (or 7two) also…

This was a mess. Who thought this was a good way to do it, throughout the whole show? Lots of inane chatter which is hard to hear in a noisy room.

Meanwhile, so many awards for high profile shows and movies are just mentioned, not shown. Ridiculous.

If you all want to watch what the mess was about, it will be replayed on 7two in one hours time (12.30pm). Well, in Sydney anyway. Why not show the full replay in that slot, instead of the 90 minute version?

The point of the host is to engage the viewers in the room, and those at the auditorium. Prices weren’t cheap to be there. To see the host for 1 minute (30 seconds at the beginning and 30 seconds at the end), and see one musical act is ridiculous.

And people wonder why Australian movies aren’t doing that well. They aren’t even represented that well at the AACTA Awards ceremony. And arent these awards sponsored by Foxtel? So pay more in the sponsorship, and air the whole thing on Seven

And you can get Best Drama shown on Seven, where most the shows are on Foxtel…

I’m glad someone is saying something about how bad the AACTAs were. Is it correct to say that Seven won no award at the AACTAs of Logies this year?

Does The Front Bar count?

Thanks to all our viewers for #TheFrontBar 2019! The Front Bar winning Best Sports Entertainment Program at the 2019 #AACTAs https://t.co/aHaDFQhHIL 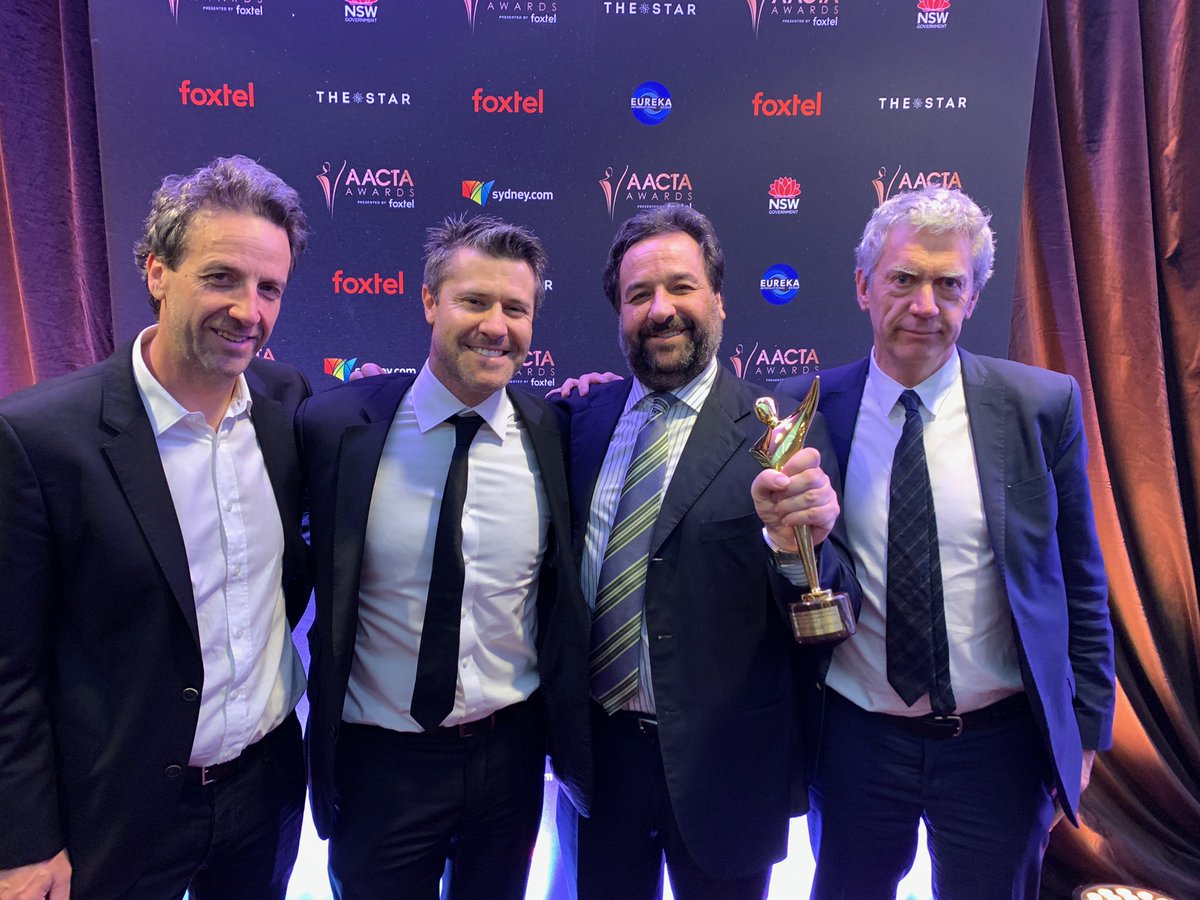