CBB US will be shown same day as the US on 9NOW starting from tomorrow.

CHOPPER: IN HIS OWN WORDS

Ahead of Sunday’s debut of Underbelly Files: Chopper, Nine has launched a 9Now exclusive documentary, Chopper: In His Own Words, featuring previously unseen, unscripted and unguarded moments of Mark “Chopper” Read’s life.

Narrated by Nine’s Sydney news presenter and 60 Minutes contributor Peter Overton, the documentary features exclusive home videos of Chopper and reveals the man behind the myth.

The 9Now documentary special tells the story of Chopper’s life, and the legend that was built around him, in his own words in home videos and through interviews he did with A Current Affair, 60 Minutes and the Sunday program – spanning all the way from 1982 to the final 60 Minutes interview he did with Tara Brown shortly before his death.

Overton said: “Mark ‘Chopper’ Read’s story is an incredible one. Chopper: In His Own Words brings together both rare home videos with some of the amazing interviews compiled by the Nine News team over decades for what is a unique perspective on one of Australia’s most high-profile criminals.”

The documentary is a complement to Nine’s latest instalment of the Underbelly drama franchise with Underbelly Files: Chopper, which goes to air this Sunday on Nine and 9Now over two massive nights (part two on Monday, February 12) after Married at First Sight.

AVAILABLE FOR VIEWING ON 9NOW

I really enjoyed this.

The current streaming placeholder slide due to Olympic restrictions: 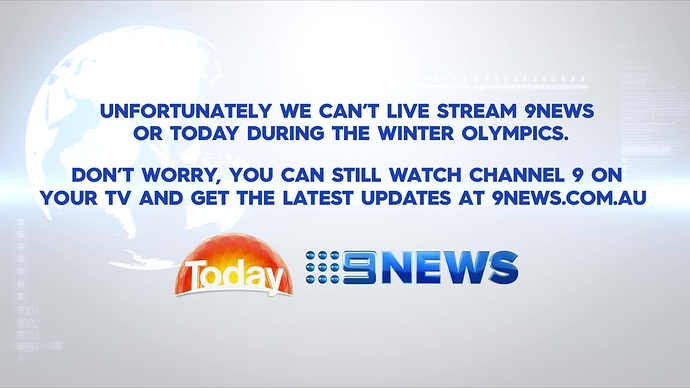 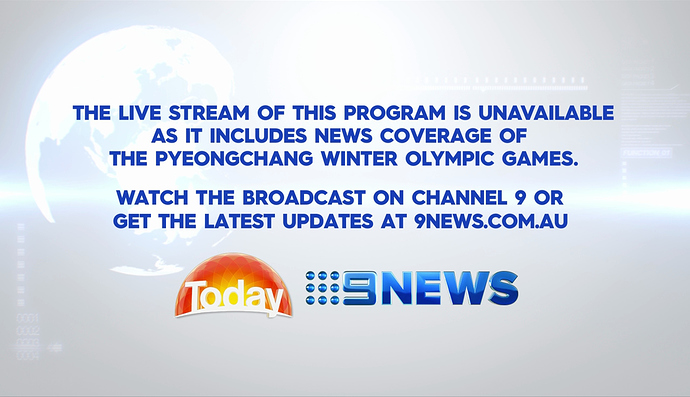 STATE OF ORIGIN ON 9NOW FIVE STREAMS EXCLUSIVELY LIVE & FREE 9Now will offer unrivalled digital access to Holden State of Origin with five live streams available to footy fans EXCLUSIVELY, LIVE and FREE across the epic three-game series in 2018. Starting today, Monday, May 28, 9Now will feature memorable moments, clips from the archives and highlights from last year’s series in the build up to Origin I on Wednesday, June 6, at the MCG. All three games will be available anywhere, anytime on 9…

@arcadeyblog @9Go @blmbrk We know it's not fair, BUTT don't stress we're working to get it fixed ASAP! #LoveIslandAU

@RitaHalaMadrid We don't want you to miss this either! 😭 We're working on getting it back up and running as soon as possible for you! #LoveIslandAU

Apologies to all our @9NowAU viewers, we're looking to get things fixed for you ASAP! Hold tight! #LoveIslandAU

and a dozen more the same

9Now will have the subtitles for the hearing impaired

The Australian reports today Nine will spend a record $2 million-plus to beef up the content on 9Now, including Australian premieres of medical drama New Amsterdam (which was last week picked up for a full season of 22 episodes) and comedy I Feel Bad. The two shows are both from Nine’s program deal with NBC Universal.

Hard to believe that 9 Now is Australia’s only HD catchup service. If Ten All Access is in HD then maybe not the only one… that would leave 7 with the only non HD service. I was expecting Iview to go HD late last year but it never eventuated.

Nine to beef up 9Now content and advertiser products over summer

The 9Now platform is to get a boost over summer, with Nine confirming it will be buying new content and extending its advertising and data products on the

Is this possibly in response to 7Plus uploading tons of ‘box sets’ lately of old popular shows (Blue Heelers, All Saints, Packed to the Rafters, City Homicide just to name a few)?

Is this possibly in response to 7Plus uploading tons of ‘box sets’ lately of old popular shows (Blue Heelers, All Saints, Packed to the Rafters, City Homicide just to name a few)?

Yeah those City Homicide boxsets are all the internet is talking about at the moment!

More likely it’s in response to streaming of all kinds, especially the big players.

More likely it’s in response to streaming of all kinds, especially the big players.

It was just in regard to something specifc I read in one of the articles about it today, something about “favourites” (not just catch-up for first runs), like TBBT and possibly older Nine staples?

The multiple Skippy, Seaway and The Avengers repeats have been shafted by Nine from 9Gem with the increase in home shopping shows. Yes, we need those older Nine staples on 9Now.

Nine Looks To Take 9Now To The Next Level 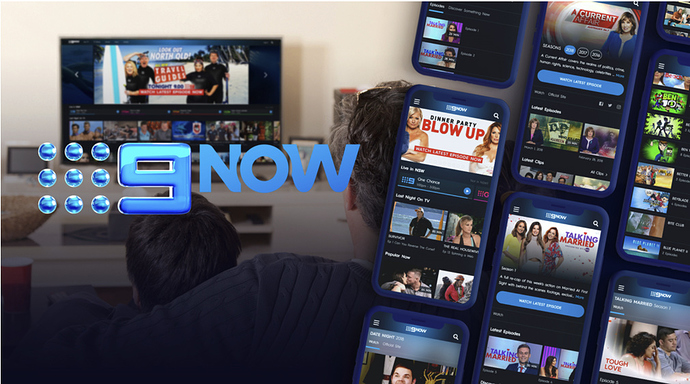 Nine will build out its online video content and data offering throughout the summer and into 2019, providing marketers with a deeper advertising experience across the 9Now broadcast video on demand (BVOD) platform.

Ahead of this week’s Nine 2019 Upfront showcase, the media company confirmed it would be investing in brand new binge-worthy content, and building out a library of audience favourites. Brand new content includes with the US mystery drama series Manifest, Medical drama New Amsterdam and Amy Poehler’s comedy, I Feel Bad.

“Our ambition is to deliver premium entertainment across the 12 months of the year for both our audience and advertisers,” Hamish Turner, Nine’s Program Director. “Alongside summer’s biggest sporting event, the Australian Open, you will see the biggest new show out of the US Manifest and a collection of Nine favourites including The Big Bang Theory, Young Sheldon, The Middle, E.R and 2 Broke Girls.

“Our goal with 9Now is to provide our audience with the best access to entertainment, anywhere, anytime enabling greater engagement for brands during one of busiest retail periods of the year – Christmas and into 2019.”

Over the course of 2018, 9Now has led the Australian BVOD space with a monthly audience of more than 2.2m users each month* and building a database of more than 7 million declared users, driven by the success of formats like Married at First Sight and Love Island Australia which smashed the traditional television model, breaking digital audience records on the platform.

“For the past two years we have done a summer initiative to build up our BVOD audience,” said Pippa Leary, Nine’s Commercial Director – Digital Sales. “But this year we are doubling down and ramping up our offering as we head into the biggest event of the year in the Australian BVOD space – Married at First Sight.”
Earlier this year Nine launched true addressability into the Australian market – through its declared database of more than 7 million signed-in users – and promised to use the Upfront event to further highlight the strength of its data offering.

Nine is one of the only Australian media companies to have built its own identity graph that seamlessly links all devices to create anonymised user profiles.
“We are out with cookies and down to actual people, creating a single view of our customer in what we calling our Nine User ID,” said Leary.
“It is worth noting that very few broadcasters globally have successfully built this, let alone device graphs for connected TV, and there are even fewer who could link these devices to actual user profiles.

“This means we understand who is watching on the big screen in the living room, or on whatever device they choose.
“This is powerful stuff, in line with the capabilities of global tech players like Google and Facebook but with far more transparency, in professionally produced, brand-safe environments.”

Nine confirmed the next stage of the 9Now roadmap would implement new data visualisation tools and closed-loop reporting, allowing it to offer marketers more accurate insight and measurement reports.

“For the first time we can track how your campaign is performing, from creating brand awareness at the top of the funnel right through to conversion and sales – allowing you to track key business outcomes directly off the big screen,” said Leary.

And using the advertising product Finecast from Group M, targeted ads that will circumvent ad blockers. WPP's GroupM has announced the launch of its addressable TV business, Finecast, Down Under.

Nine’s chief sales officer Michael Stephenson said at today’s upfronts that 9Now would be integrated into 9Galaxy in 2019.

“In 2019, the data from our 7 million signed in users and the Virtual Oz data base will be fully integrated into 9Galaxy” #9Upfront https://t.co/HoeZNafvx4 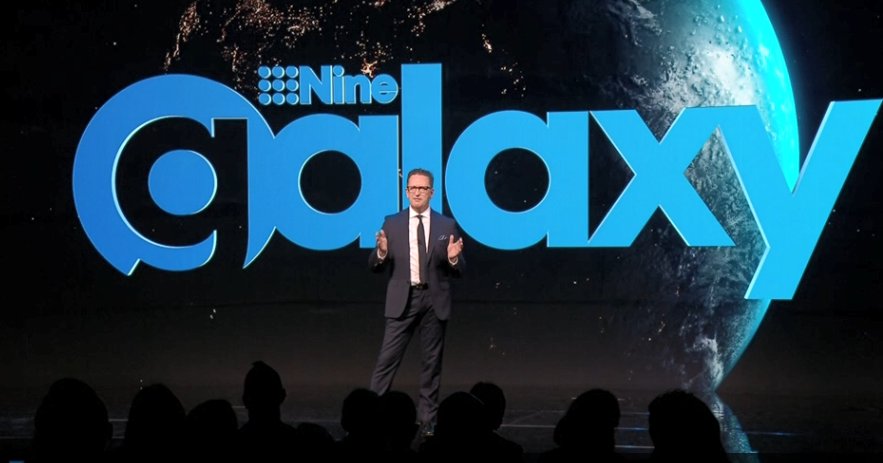 So full back seasons of The Big Bang Theory , E.R. and 2 Broke Girls will be available over summer ?

2 Broke Girls 6 seasons seems to be available as well as Lethal Weapon Season 1 and 2. E.R is up too.

Not seeing all seasons of The Big Bang Theory on there.